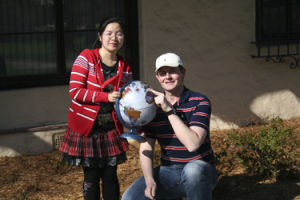 Fangyuan “Mary” Ying crossed the Pacific and Marcel Kubsch crossed the Atlantic to attend Washburn University. They are international exchange students here for a semester to learn about U.S. language and culture.

Marcel Kubsch is from Bremen, Germany, where he is a senior majoring in business law at F.H. Osnabrück University of Applied Science. He continues his business studies here at Washburn, but his main reason for being here is to study and practice English.

Language has not been a problem for Kubsch, although he did have to drop a business law class because it did not apply to his studies.

“Our legal systems are different, Kubsch said. “Ours is commonwealth law.”

Washburn class sizes are similar to his college in Germany, but he is not used to homework and mid-terms.

“At my college, you are responsible for yourself,” Kubsch said. “You could possibly do nothing all semester, but the final exam is everything.” He believes that while Washburn requires a lot of quantity academically, F.H. Osnabrück has better quality.

Kubsch thinks American and German students are similar, but he feels American are more confident and free-spirited, noting that Americans dress more casually than students at his German University. Students who are studying business there are expected to dress in business attire.

For amusement, Kubsch enjoys handball and tennis at the Student Recreation and Wellness Center and Texas hold-em tournaments. Kubsch has found sports to be a great way to meet people and socialize. He said Washburn has been warm and welcoming, and he has enjoyed meeting many Kansans who have German roots.

Fangyuan Ying goes by “Mary” because it is easier for Americans to pronounce. A junior from Ningbo, China, Ying is an English major training to be a teacher at Zhejiang Normal University. She said Chinese academics are very competitive, with hundreds of students competing for each opening. At Washburn, Ying is taking classes in communication and English.

Between studying English and practicing it with her American roommates, Ying said language has not been a problem for her. Fast talkers, slang and humor can be difficult to understand, but she is getting better at it. Ying said she appreciates how frank and direct Americans are, and she likes their friendly attitudes.

She said relationships are different in America.

“I found students here take it not so serious as we Chinese do,” said Ying. “Maybe we are a little bit conservative. In my home university, boys are not allowed to enter the girls’ dorm.”

Ying had a little trouble getting used to a high-calorie diet. She said American meals are served too cold. In China, a meal must be served piping hot to be considered good. Ying thinks Chinese restaurants in the U.S. serve too much fried food and not enough fruits and vegetables.

“We do not have fortune cookies in China,” she said.

To socialize, Ying enjoys church, basketball games, swimming at the recreation center and attending concerts at White Concert Hall. She is here with six other Chinese citizens. Her group has had the opportunity to tour the east coast, and they will visit the west coast before they return to China.