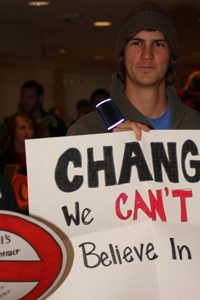 Aside from the usual pizza and sandwiches, Washburn administrators were served a healthy portion of student opinion Thursday as a group of roughly 40 vocal Ichabods gathered outside the Union market to protest the contract extension of Chartwells Dining Services.

On March 20, the Washburn Board of Regents made the decision to extend the university’s contract with Chartwells through the next decade. In return, Chartwells has planned $700,000 in renovations to the Union Market and the Corner Store, all planned to be finished by the 2009 fall semester.

The spearhead of the protestors’ argument was that students were not consulted prior to the decision. Norris said his ideal outcome from the demonstration would be a cancelation of the current contract and renegotiation with student input. The contract allows for either party to cancel it with 60 days notice. When asked why students had not been included in the discussion, Duke Divine, director of business services for the Memorial Union, said the primary factor was time. Specifically, Divine said if the decision had waited, the renovations may not have been in place by fall.

“I honestly thought we were doing a good thing,” said Divine. “But, what’s the saying, no good deed goes unpunished.”

Matt Beadleston, director of dining services, echoed the reasoning during the WSGA meeting on April 1.

“The reason we chose to present it at [the meeting on March 20] is because if we would have waited, we would not have been able to provide this next fall,” said Beadleston.

Norris was dissatisfied with the reasoning.

“There is always time to talk to students,” said Norris. “I want students to decide if they want Chartwells here or not.”

Amy Billinger, WSGA vice president, was also unhappy with the lack of student input on the issue.

“Students are on almost every committee across campus that makes important decisions,” said Billinger, “so why not involve students in this decision?”

Beadleston attended the WSGA meeting to speak with senators about the proposed renovations. He also gave an apology, saying the issue should have been brought before students prior to finalization. When the tide of conversation shifted to why Beadleston had not met with the student government’s food services committee, he said he was aware it was being created, but was unaware it had formed.

Senator Ashley Baker, a member of the food services committee, said the organization had its first meeting around late February or early March. Baker said she thought someone had contacted Chartwells to inform them the committee had been formed; however, the group had not yet met with Beadleston prior to the contract extension.

Even so, Billinger and Norris agreed that was unacceptable. The two said even if administrators had not known about the committee, student government has been in existence for more than 100 years and should have been notified.

“When this decision was made above our head, it’s kind of like kicking my knees out from under me,” said Billinger. “I’m supposed to be the voice of the students, and with this situation I wasn’t able to do that.”

Another point of contention were the results of three surveys Chartwells administered over the course of 2008: one in March, one in October, and another in November. Chartwells used the results from these surveys to design the renovations to the Union Market and Corner Store. Some students felt the sample size was too small and the questions were too leading. However, Steve Cann, political science professor, said otherwise.

Cann, who teaches an applied research course at Washburn, has a significant amount of experience creating and administering surveys, as well as examining the resulting data. While the two initial surveys were unavailable, Cann was given the survey which Chartwells administered in November 2008. This survey was also distributed to senators at the April 1 WSGA meeting. After examining the questions, Cann said the survey questions seemed fair and that it offered several opportunities for the person taking the survey to supply his or her own answer.

Further, Cann said the sample size of 320 respondents, roughly 5 percent of the total Washburn student population, was proper for the survey method utilized. When the surveys were administered, Chartwells set up booths outside the Union Market and Corner Store, a method Cann said usually garners a return from 6 percent of the target population. Cann added that the method which garners the highest return rate – about 90 percent – is physically approaching people and asking them to take the survey. Beadleston said this was a the original method of choice, but Washburn did not allow it.

Despite the protestors’ intentions, Cann thinks their actions were misdirected.

“If you’re going to go protest somebody, you should be camped outside the president’s office,” said Cann. “Chartwells did nothing more than any business would do.”

In the end, even if some were displeased by the demonstration, administrators were glad to see students voicing their opinions.

“I think it’s good for students to voice concerns,” said Beadleston, who at the time of the protest hadn’t spoken with any of the students involved. “I just would hope what is being told to the students is accurate.”