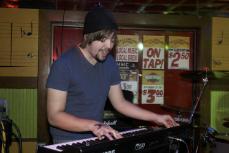 With arms wide open Local band From Quiet Arms will be at the Celtic Fox May 2 for the Jayhawk Revival.

A benefit concert to promote the Jayhawk Theatre will be held at 7 p.m. on Saturday at the Celtic Fox, and up-and-coming local band From Quiet Arms will perform at the show.

Influenced by bands like Taking Back Sunday, Circa Survive and Rx Bandits, the band has a dedicated fan base, and Brady Groothuis, guitarist, said it is the fans who make their shows exciting.

“We have some really good friends that we’ve made through our fans,” said Groothuis. “We’re the type of guys that want to party with everybody and have fun. We like to get to know everybody. We don’t want to just play a show and that’s it. We invite people over to the house after our shows all the time.”

From Quiet Arms consists of six Lawrence musicians who all hail from different musical backgrounds. Groothuis said the group’s latest songs showcase the band members’ different strengths. One song in particular stands out in his mind as a way to show off his skills.

In August 2008, From Quiet Arms teamed up with ZK Productions to produce three of the seven tracks for their EP “Carousel.” Groothuis said all the band members learned a lot from working with the production company, which has produced bands like Jimmy Eat World, Mayday Parade and Hit the Lights.

“We’d never been produced before, so the thought of being produced by them was a learning experience,” said Groothuis. “It made us so much tighter as a band, and we learned a lot from actually being in a professional surrounding.”

But Groothuis added that the band isn’t really looking for any major label deals.

“I don’t really think we’re a major-label band,” he said. ” If that happens, it’s cool, but we’re more into the Indie side of the music industry. We’re trying to form our own unique sound.”

Other bands that will perform at the benefit concert on Saturday include Left on Northwood, Echo Lake, Define Beautiful and The Cherry Tree Parade. Cost of admittance is $5, and all proceeds will go to the Jayhawk Theatre. The benefit concert is being hosted by Washburn University Student Publications.

To learn more about From Quiet Arms and listen to their songs, visit the band’s MySpace page at www.myspace.com/fromquietarms.