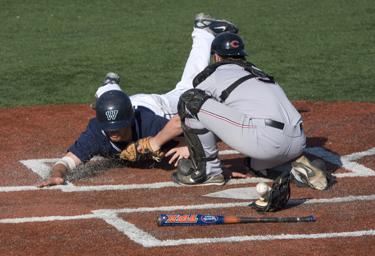 Luis Beltran Lopez slides in for a run against Central Missouri. The Bods had no trouble scoring in the series, but went 1-3 against the Mules last weekend.

Washburn stayed home last weekend to play a four-game conference series with Central Missouri, “the winningest NCAA baseball program of the millennium,” according to its athletics Web site. And while Washburn had a few bright spots, the Bods lost three out of four and dropped to seventh in the conference.

The woes began Friday for Washburn (16-19, 9-13), losing to Central in the first game 11-8. In that game, the Mules got out to a 7-0 lead on the Bods through two innings. While Washburn rallied to tie the game 7-7 in the fourth and even take a one-run lead in the sixth, Central Missouri rallied with a two outs in the seventh to score four runs and earn the victory.

“Obviously didn’t get off to a good start in that game,” said Steve Anson, Ichabod head coach. “Just did some things we haven’t done in a while, uncharacteristic.

“I feel like if we had not started the way we started game one, we had a legitimate chance to win that game. We just did some things and buried ourselves early. That’s what’s so disappointing about that game. We were an out away.”

In a game with nine errors, six Central and three Washburn, and seven total unearned runs, neither team had their best performance.

“That was not a clean game,” said Anson. “That was an ugly one and I think both us of were happy to get that one over with.”

The nightcap didn’t fare much better for the Bods as they lost 6-1.  After being tied 1-1 early on, Central slowly built a lead scoring single runs in the fourth and sixth before adding three more in the ninth to secure the victory. Washburn had two hits while committing three errors in the field. Andrew Miller took the loss for Washburn, allowing two earned runs on seven hits in 5.1 innings pitched.

“In the second game Andrew threw pretty well, made some pitches,” said Anson. “And I though Kalan [Norton] did a great job out of the pen. We got to the ninth and I think he ran out of gas. He did a nice job, gave us a chance.”

Washburn came out on Saturday in game three and scored runs early and often to beat the Mules 9-1. Scoring four in the first thanks to two costly UCM errors, the Bods snapped a nine-game losing streak to the Mules.

Game two, although it was a tight contest for much of the afternoon, went to Central as it pulled away late to win 12-5. Through five innings, the game was tied 4-4, but a five-run sixth for the Mules, along with three runs late, ended the Bods’ chances of splitting the series.

“They’re just always a tough team,” said Brian Gorges, centerfielder. “They have a lot of good players. They always have a lot of depth and good pitching. You really have to be prepared and just hooked up to stay in there with them.”

Last Tuesday, Washburn was able to acquire a non-conference road win versus Rockhurst (Mo.), taking the game 4-3. After being down 3-2 late, the Bods rallied to score single runs in the seventh and eighth innings to grab the victory. Washburn leads the four-game season series between the two teams 2-1. The final game will be played at 6 p.m. April 21, in Kansas City, Mo.

The Bods will be back at Falley Field at 2 p.m. on Tuesday to play a seven and nine inning doubleheader with the MIAA’s fifth place squad, Fort Hays State.

Washburn wraps up the week with a four game series beginning 3 p.m. Saturday on the road versus Pittsburg State. The second doubleheader will begin at 1 p.m. on Sunday.