VIDEO: Going Greek: Why do it 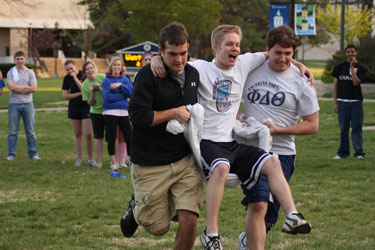 Will Falk and Brady Rothrock carry Richard Budden in the Sheet Race during the Greek Olympics last week.

Joining a Greek social organization at Washburn is one of an array of options a student has to get involved. And while it is more than just a club, and actually a very big commitment, some of the Greek community’s most established members agree that joining is one of the best decisions they ever made.

Lacey Bryant is a junior biology major who has been in Alpha Phi sorority for three years, and is currently serving as president. And while she said she loves all the organizations she’s a part of, being in a Greek organization is different.

“It sets itself apart from other organizations in that you’re Greek for life. It’s just a much more intricate process to be a part of,” said Bryant, who wants to go to medical school to become an oncologist. “And you have to understand what it means going in to be Greek. It definitely is something not to be taken lightly. It’s definitely something you want to go into wholeheartedly.”

“One of the things we always say is, ‘from the outside looking in you can’t understand it, but from the inside looking out, you can’t explain it.’ You have to try the process before you can understand if it’s right for you or not.”

While there are many misconceptions and prejudices about fraternities and sororities, Bryant said it’s not the same at Washburn.

“It was something that, once I got into it, I realized it wasn’t like the stereotypes. It wasn’t what everybody thought it was,” she said. “Being on a smaller campus, it’s on a completely different scale.”

Richard Budden, a senior accounting and management major in Sigma Phi Epsilon, attended Washburn for two years without getting involved in anything or meeting anyone. But he said after he joined the Greek community, there were many benefits that he wouldn’t have gotten otherwise including making new personal connections and becoming a leader.

“Leadership is huge,” said Budden, who plans to go to law school after graduating. “I didn’t get to show that off in the first two years and now I’ve really been able to step up in that house and be the change that I want to see happen.”

“And also, I’m in a house with like six guys that have the same major as me,” he said. “So it’s nice to have homework help and know what professors to take and all sorts of help like that.”

While Budden admits he was already a good student before joining a fraternity, by going Greek he found individuals he could look up to, such as his older brother, who is an elder member in the Greek community.

“I was given a great example,” said Budden. “Somebody that thinks the way I do; someone that has the same kind of professional goals. Not to be cocky, but I came in as my own example and he really gave me something to shoot for. Like it can be done, it’s not just me on my own out there.”

Lauren Greer, a junior and a member of Kappa Alpha Theta sorority, plans to enter the School of Nursing. While she’s been Greek for three years and has had a little different experience because her sorority doesn’t live in a chapter house, she has found that being a part of a Greek organization is beneficial.

“It’s helped me so much about compromise and working with people for a common cause.”

Going Greek also allows for unique memories. Greer told a story about some Theta alumnae who she met at a Founder’s Day event.

“There were three ladies that were part of the chapter during the years before and after the 1966 tornado, and they were laughing and joking about it and we were all talking about memories in the house,” said Greer. “One of them told the other one, ‘Well you know it’s your fault that tornado blew our house away.’ The other said, ‘how was it my fault?’ She said, ‘You had a Ouija board in the closet all semester. You know it was your fault.’ I love all of our alums and we’ve all got the common bond that spans the generations back to 1870.”

There are eight official Greek social chapters on campus, and one that is attempting to colonize. For more information on Greek life, visit Jessica Neumann, assistant director of Student Activities and Greek Life, in the lower level of the Memorial Union or e-mail her at [email protected]

Secretary of State speaks to Greeks

How Greeks Care for Soldiers