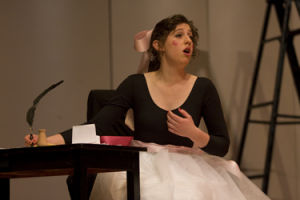 The music department at Washburn University exhibited a tour de force April 3 and 4, performing excerpts from two operas in White Concert Hall. Gioachino Rossini’s “Il Barbiere di Siviglia” (The Barber of Seville) and Guiseppe Verdi’s “Falstaff” were significantly shortened because of time constraints and the youth of the performers, but both operas served as platforms for the singers to exhibit their skills.

The concert opened at 7:30 p.m. with Rossini’s piece, with an introduction by its director, Washburn University professor Dr. Lee Snook. The opera, based on an earlier French version of “The Barber of Seville” by Pierre Beaumarchais, follows a timeless formula of romance.

Rossini wrote “The Barber of Seville” when he was 24, and it was his 17th opera. The entire performance would have lasted more than three hours, so it was shortened to selected scenes from the first act. Snook filled in the gaps.

Snook said most of the songs in “Barber” are much easier to sing in Italian because the musical phrasing was made for Italian diction.

“If they were written in English, the melodies would actually be different,” said Snook.

A few of the solos in “Barber” were sung in the original Italian, including Figaro’s famous entrance aria, “Largo al Factotum Della Citta.” (Figaro, Figarrrroooooooo!)

Elliot Lauxman, the student who played Figaro, was given props such as a barber’s pole and electric razor to help the audience interpret his solo.

“It was a very difficult song. I worked a lot in the last four months just on that song itself,” said Lauxman. “It’s great to see the work pay off.”

If Rossini seemed somewhat young to be writing operas, then Verdi had the opposite issue: he was 80 when “Falstaff” premiered in Vienna. The opera, based on Shakespeare’s “The Merry Wives of Windsor” and “Henry IV,” was directed by Ivalah Allen. It featured the second scenes of Acts 1 and 2.

“Falstaff” is the story of a man down on his luck who tries to seduce several married women for money. The plot thickens when the women discover his treachery. They decide to try to make sport of him.

More mischief ensues as a prankster’s husband suspects her of going through with the affair and attempts to out her “lover.” Comical trouble runs rampant as the pitfalls of double-crossing are displayed.

“I’m personally not a fan of just doing scenes,” said Rick Huffman, a vocal performance major who played in “Falstaff” as Dr. Cajus. “But these are difficult operas.”

“Opera is the Italian word for work,” said Snook, which demonstrates what is both loved and hated about the art form. “Some students have never done anything like this,” he said. “It’s a lot of hard work. They’re not used to it. Not only do we make them sing, but we make them walk around at the same time.”