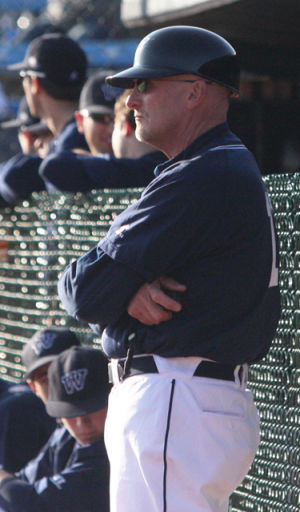 The Ichabod baseball team played their final games of the season this weekend against Nebraska-Omaha in Omaha. And while all the Bods were playing for was pride, WU played every game close and earned a split.

The Ichabod baseball team began the weekend Saturday splitting with the Bulls.

After falling behind 7-0 through four innings of play in game one, the Bods battled back with a four-run fifth inning thanks to a grand slam by senior Brett Sorenson. The Bods added one more in the sixth but the Bulls proved to be too much as they defeated Washburn 7-5.

“I thought in the first game our hitters struggled early but came back and battled,” said Curtis Hamilton, senior. “We put some bats together with a rally and Brett’s grand slam.”

“We just came up a little short,” said Wes Joy, junior third baseman who went 1-for-2 with a RBI and a run. “It was nice to see we didn’t give up. When we ever we got down, we came back and we had our chances.”

In game two, UNO jumped out to a 1-0 lead in the first before WU scored four in the fifth to take a 4-1 lead. The Bulls responded by tying the game in the bottom half of the fifth before WU took the lead for good in the top of the sixth on a Calvin Iversen RBI single. Each team added one more run a piece in the eighth but the Bods end up holding on to get the 6-5 victory.

Junior starting pitcher Dustin Holthaus picked up his fourth win of the year going eight innings while allowing five runs, just two earned, on nine hits. Sophomore Jeremy Heeke picked up the save, his first of the season.

“In the second game, Dustin pitched well and put up a lot of zeroes,” said Hamilton.

The Ichabods finished the season after a doubleheader Sunday against the Bulls, while UNO will now advance to play in the MIAA Tournament this Friday at CommunityAmerica Ballpark in Kansas City.