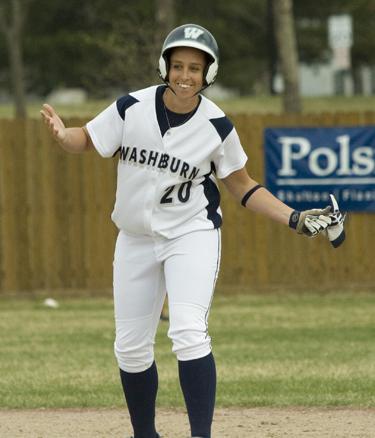 The Lady Blues had some stellar performances and record breaking feats on the diamond this year, but their season came to a screeching halt on Friday, as they dropped the first game of the MIAA tournament 9-0 to in-state rivals Emporia State and 5-3 to Missouri Southern in the second game.

“In that first game we were uptight,” said coach Lisa Carey,”and Emporia capitalized on fakes and missed pitches. We just weren’t as loose as we should have been.”

Typically hits are something that the Blues have managed to get this season, but against Emporia the team managed to put together just three hits over the five-inning stretch.

“Our defense really struggled a bit and after the first three runs we seemed to lose our drive,” said senior third baseman Tish Williams.

The Hornets got a single run in the first, six in the second and two home runs to pull out to a 9-0 lead, subsequently putting the game out of reach for the blues.

In the second game, as if to undo the first game’s loss, the Lady Blues leapt to a 3-0 lead thanks to a pair of first inning homers coming from senior Dani White, who recorded her 12th of the season, and Ashley Podschun, who recorded her fifth.

Missouri Southern reacted in emphatic form by recording two runs of their own in the second inning and one in the fourth to tie the game. Going into the fifth inning, Missouri Southern took control of the game with a two-run home run, and put an end to Washburn’s season.

“All season we haven’t really managed to put a complete game together,” said Nicole Perkuhn, junior. “When our hitting was on, our pitching wasn’t and vice versa, we just couldn’t pull it together.”

Carey said youth was a factor this season as the team learned to play together, but with most players returning, experience could be the difference-maker in 2010.

“We only had two seniors, so for the most part we were a pretty young team,” said Carey. “For many of the girls it was a learning experience. Next year, we need to be mentally tougher than we were and with heart and desire we should have no excuses going into the next season.”

Looking to next year, several players, as well as the coach, are optimistic that it will be a better.

“We definitely need to work on team chemistry,” said Perkuhn. “We have got to stay together and maintain that team chemistry in order to have the kind of season that we know we can have.”