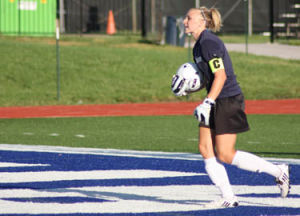 During the two and a half hour daily practice, the women’s soccer team works on a variety of team building skills. They scrimmage, condition and run numerous maneuvers in small groups that coach Tim Collins prepares to give the team the upper hand at game time.

Goalkeeper Ashley Klone works one-on-one, however, with a coach to develop her goal-keeping abilities. At least once during practice, the entire team jogs across the field to bump fists with Klone to give her their support.

Klone is the only goalkeeper for the team-a bit of a risk said Collins-making her a valuable team component. The junior biology major also serves as the team’s captain.

Collins and his assistant coaches typically elect two captains per semester, and they are considering which of the Lady Blues would make a good second captain, but for now, Klone is it. And she will remain the first captain for the rest of the semester.

“From my perspective,” Collins said, “[the captain] is a representative for the team, a leader on and off the field and a positive role model.”

Selecting the captain was a difficult task, said Collins, because of the general talent and individual aptitude of each team member.

“We have many capable seniors on the team this year. It’s tough to sit down and go through everyone’s strengths and weaknesses,” he said.

“First, her effort in practice is relentless. Second is her success in the classroom. Third: her natural leadership skills.

“And to add a fourth reason,” said Collins, “she has a passion and desire for team success.”

Collins does have expectations for his team on and off the field. Each team member is expected to sit in the front three rows during class, for example. And of the 20 hours per week that the NCAA allows for practice, the Lady Blues are on the field for 17.

As far as Klone is concerned, her position on the team and the field makes her an ideal captain.

“[As the goalkeeper] you are the last person back,” she said “you can see more of the field and organize the team. The position presents leadership.”

As the lady blues prepare for their first game in Golden, Colo., against the Colorado School of Mines Orediggers, Klone said she will work on discipline, encouragement and team building. Last year, to strengthen the team, the Blues got together for potlucks and movie nights. Nothing too out of the ordinary.

“Typical stuff for a group of girls,” Klone said.