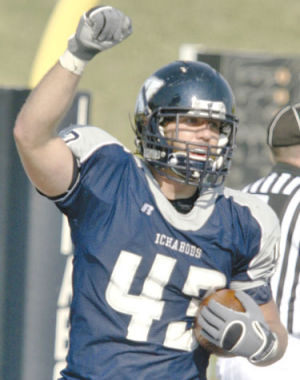 Five Washburn football players, three of whom are linemen, have been named to the 2009 D2Football.com Preseason All-MIAA Team.

Watkins, a fifth-year senior, led the Washburn defensive with 119 tackles last year, including 1½ sacks. He also led the squad in interceptions with five. He needs 98 tackles to become Washburn’s all-time leader in total tackles-he currently sits at 362.

Curran, a junior, wasn’t far behind Watkins, totaling 93 tackles, one sack and four interceptions. He is also a punt returner and is fifth all-time at Washburn in punt return yardage with 364.

Jackson, also a fifth-year senior, added 31 tackles and 1½ sacks of his own last year. He is versatile and has spent time at both defensive end and defensive tackle at Washburn.

Northwest Missouri seniors LaRon Council, running back, and Miles Burnsides, defensive back, were named the offensive and defensive players of the year, respectively. Several other Kansans were named to the list, including three Fort Hays State and three Pittsburg State players. No Emporia State players made the list.

Washburn also received votes in both the D2Football.com and American Football Coaches Assocation preseason Top 25 polls, although it didn’t make the top 25 in either poll. There were six MIAA teams that received votes in both polls. In the AFCA poll, Washburn received 22 points. No. 25 ranked Central Missouri, an MIAA school, received 72 points.