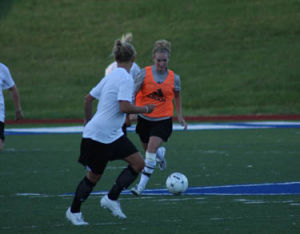 When the term “three-a-day” is used, good thoughts usually don’t come to mind. The 6 a.m. runs around campus are followed by practices from 8-10 a.m. and then again in the afternoon from 3-5.

But in the first week of practice last week for the 2009-10 Washburn Lady Blues soccer team, it was just another day at the office as they began their push for another deep run into the NCAA tournament.

“They were long and tough, but it was good getting to know everyone and being our around all the freshmen,” said Angela Wiseman, senior midfielder who’s been with the team for all four years.

The freshmen, who include eight new additions to the team along with four more red-shirt freshman, make up a big part of a team that lost seven seniors. Seventh year coach Tim Collins, the first head coach of the Lady Blues soccer team, is excited about the different look with new leadership.

“In regards to newcomers, we have three freshmen that are really doing well, Leah Talley, Tia Stovall and Stefanie Stuever,” said Collins. “And our captain Ashley Klone provides us with terrific leadership as well as the presence of our four seniors, Ashley Taylor, Keeley Lambeth, Lauren Lawless and Angela Wiseman. We have a terrific junior class as well.

“We have a lot of new faces, and yeah we lost a lot of key players in our seniors who finished their eligibility last year. But we’re excited about the potential this team has.”

The Lady Blues’ potential showed last Saturday night in their first scrimmage of the season in Des Moines, Iowa, versus Division I school Drake. Although the team lost 3-2, the end result wasn’t nearly as important in an exhibition like this as the progress they made.

“We played really well. Didn’t come out with a win but we had a lot of good things going on working together,” said Wiseman. “Stuff we’d been working on in practice throughout the week kind of came together at the game so that was good.”

While some things did go well in the first real game action of the year for the team, Wiseman said that the team’s main weaknesses came from just not playing in a college game in a while, if ever.

“Our first touch [was a weakness], which is just going to come with practicing and getting our nerves down under us,” said Wiseman. “For a lot of the freshman, it was their first college game. And for us, it was the start of the new season so we were all nervous and excited. We just had to settle down and play like we knew how to play.”

Since school has started, the team is back to practicing once a day in the afternoons. But they will continue to scrimmage before the season kicks off, with an exhibition scheduled late Tuesday evening versus Baker at Moore Bowl and another at 8 p.m. Saturday versus Butler Community College also at home.

“I think the first thing is to take care of business in non-conference play. And going to Colorado and having a good showing. And we have to win other non-conference games,” said Collins. “Those are where we’ll set the conference. Because our conference is so strong, we have to approach it one game at a time. And pay attention to detail. And work to play our game consistently day in and day out.

“Mines will be a terrific test because they made the tournament last year. And we’re on their home turf dealing with elevation, which we handled quite well last year. But in the grand scheme of things, those are two games for us that kick off the season.”

The Washburn women soccer team was ranked No. 26 in the preseason National Soccer Coaches Association of America Coaches poll as well as No. 4 in the MIAA preseason soccer coaches poll. While these are high marks for a team losing so many leaders, coach Collins said that the key to rising to the top in the MIAA and nationally is playing to the strengths of the team.

“We’re a team that is very together and has terrific chemistry,” said Collins. “We have speed and a terrific knowledge of the game. And all of those things combined allow us to do some things we haven’t been able to do in the last couple of years.”