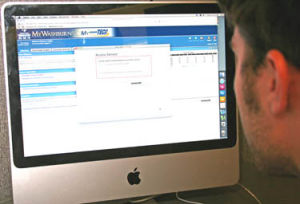 The campus online systems have experienced problems over the past two weeks, and ISS has been working diligently to fix some of the primary problems that have plagued the online network.

Washburn has recently upgraded its Luminis platform. In an agreement with Sungard Higher Education, Luminis has to be upgraded to keep up with software updates and the general technological needs of the university, its faculty and student body. Washburn has upgraded from version Luminis 3 to Luminis 4.

Gunter compared the necessity for the software update on campus to the need for operating system updates such as Microsoft Windows 7. The updates fix bugs, improve functionality and give users the chance to give input.

“One of the interesting things we’ve seen since we’ve rolled out the new MyWashburn is increased activity. Previously we’ve seen 500 to 600 concurrent connections. From around 9:00 p.m. to 10:30 p.m. we’ve seen as many as 1,800 connections. So we’re seeing three times the traffic this semester than we’ve seen in previous semesters,” said Gunter.

“We’ll work through this. We’re working with our partners at Sungard. They’re the ones who wrote the software, know how it works and installed it, so we’re looking to them to help us. They know that the transition hasn’t gone as smoothly as possible but we’re just trying to work through the glitches as quickly as possible,” said Gunter.

“Personnel at Washburn are not experts at operating those large systems. The company that produces those products come in, installs those programs, maintains and services them,” said Gunter, “we’re asking people to bear with us as we resolve some of these issues.”

Murphy has also been dealing with the problems of software upgrades. ANGEL is the new education software that the university is utilizing for online, as well as in-class instruction. ANGEL is an update over the outdated WebCT education portal.

“WebCT was coming to end-of-life, so we had to make a decision for a new portal. We took quite a bit of time to decide on a new platform and we settled on ANGEL. We started training faculty at the beginning of the year and we ran a summer pilot program of about 50 sessions, about a third of the courses offered through WebCT, through ANGEL. That actually went really well. I really appreciate the faculty and students that took part in that process because it really helped us prepare for the fall,” said Murphy.

“The ANGEL portion of Washburn’s online offering is running well. I don’t know about some of the other aspects of ISS but the ANGEL system is running well. The faculty is able to lay out their course in a manner that makes sense,” said Murphy.

In WebCT, the student was required to visit one area to find content, another to find quizzes and yet another to find communication tools. In ANGEL, all material is presented to students on one screen. Productivity tools such as the task list and the calendar give students a way to organize themselves. Faculty, if they choose, can present the course in chronological order to better maintain continuity of organization within the course.

Murphy said that even in “face-to-face” courses, students benefit from knowing how they are doing in the class by knowing their grades. ANGEL offers faculty the option to post grades online.

“These are just a few things that I think are going to benefit students,” said Murphy.

ANGEL Learning is not owned or run through Sungard software so it is disconnected from many of the problems that have plagued Washburn’s online services. On the other hand, ISS is in constant contact with Sungard, so Washburn, Sungard and ANGEL are working together to make the online systems run properly.

“It adds stress and pressure to everybody when things aren’t running perfectly,” said Murphy. He said there are always going to be pieces of the puzzle that are out of place and need tweaking through the semester.

Murphy has had faculty that weren’t looking forward to the switch give him positive feedback. Students have also really liked the change. WebCT was 10 years old and needed major overhauls. The switch to ANGEL fixed old problems and provided new tools for students to work with.

Washburn has a three year contract with ANGEL. They will host the software programs for the first year and then Washburn will move the hosting in-house.

“It’s been a hectic first part of the semester but I think further on down the road, our online program will need more courses placed,” said Murphy. He referenced President Farley’s address at the university convocation as a marker for where Washburn is headed in terms of increasing the focus of online education. Murphy said that’s just the way things are moving.