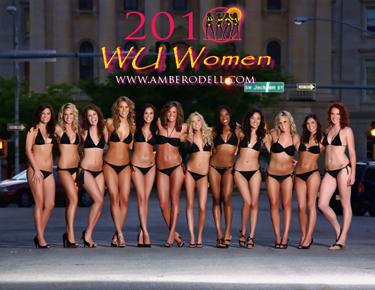 Class of 2010 The WU Women pose in front of the Capital building. This year the women will shake things up, donning costumes for different themes and interacting more with the audience during promotions. Photo courtesy Amber O'Dell.

This will mark the fourth year for the “WU Women” calendar, previously known as the “Women of WU” calendar.

Because of several legal issues with the owners of the “Women of KU” calendar, the name has been changed slightly this year. Despite that, Christi Somers, director of advertising and marketing for the calendar, expects a bigger year than ever for the calendar. “We switched things up a bit,” she said. “There’s going to be a lot more crowd interaction at our events this year. We’re excited.”

Not only are the events going to be more interactive, there are going to be more of them and in more locations in Topeka than in previous years. There will be themed events, for instance, where participants will be asked to don costumes. One of the themes will be “Celebrity Look-A-Like” at Frances O’Dooley Irish Pub. Another will be a pirate-themed event at The Boobie Trap Bar, where the entertainment for the night will include a ska band from California. There will also be events, themed or otherwise at The Office, Tailgators, Lucky Dog’s, Jeremiah Bullfrogs Live and many other locations throughout Topeka. There are more than 14 events scheduled between now and December, and many of the events this year will have T-shirts to remember them by. “We have some awesome stuff planned for this year,” said Somers.

Some requirements are the same as previous years. Each woman must be 21 years of age, enrolled at Washburn, meet certain GPA requirements and go through the interview process to be considered for the WU Women. There are even a few returning girls, one of whom is Misty Remus.

“It was a lot of fun,” said Remus. “I was nervous for the initial interview last time, but this year I was ready for it.”

Although the requirements have not changed much, the new schedule of events, design of the calendar, and the girls are unique this year.

“The design gets better every year,” said Somers. “[Calendar owner Amber O’Dell] always finds ways to make the calendar even hotter. There may even be a commercial in the works. If there’s one word to describe the girls this year, it would be fresh. There’s a lot of good energy.

The calendar premieres today at Tailgators Pub and Grill.