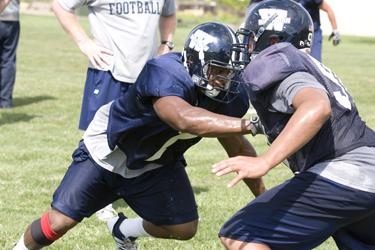 Dedication Washburn defensive end Eric Lawrence, wearing the No. 7 jersey since his practice jersey was ripped, has plenty of inspiration this season to get him through the hardships of the season.

The sun’s unrelenting rays served as lighting and the sound of coaches barking and whistles blowing was the background track as No. 90 discussed his focus for the upcoming Ichabod football season.

Lawrence, who has accrued 138 tackles and 33 tackles for loss (second all-time at Washburn), is coming off a 2008 campaign that was derailed by an MCL injury. Lawrence said his knee is fully recovered and stressed he was ready to help his team to a championship this season.

“This year we are really trying to dedicate this season to Ben Muir,” said Lawrence. Muir died in a single-car accident on March 7. 2009. “That’s really my motivation right there-motivation enough to get me through practices. Even when I don’t want to practice sometimes. I think about Muir or whatever, that he’d be out here practicing hard. But he’s not here right now, so we’re trying to give a national championship to him.”

Lawrence said the memory of Muir will motivate him throughout the season to lead the Ichabod defense and add to his impressive 14.5 sack total, which ranks fifth all-time in Washburn history. Lawrence’s performance in camp has drawn praise from his coaches, as well.

“He’s moving very fast and great, back to where he was last year, still recognizing blocks very well, and moving fast off the ball,” said David Trupp, defensive line coach.

Despite the praise and astounding stat line, the defensive end does not let his success go to his head. Lawrence lays his success at the feet of his coaches and teammates.