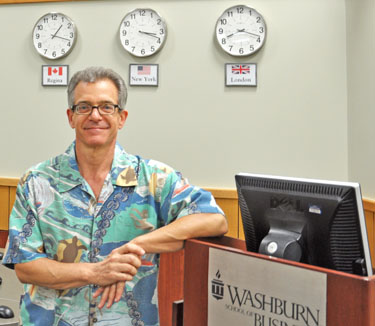 A little good news Leading economic indicators show that our economy is stabalizing. Business Professor Rob Weigand explains what this means for the future.

Some positive economic indicators have created a recovery buzz in the mass media, so the Review turned to Washburn business Professor Rob Weigand, who has completed a macro-finance outlook for August 2009.

Using graphs and succinct explanations, Weigand showed how various economic indicators were behaving and compared them to historical market trends. He cautions that while the index of leading economic indicators has turned positive and loans have become more accessible, it is still a mixed bag.

“The analysis does not show an upswing, it shows a stabilization,” Weigand said.

Consumer spending has yet to rebound. People are putting their money into savings more than ever while durable orders continue to fall. Luxury indicators that rarely decline like alcohol consumption and gambling are still falling. Weigand said that we may be entering “a new era of thrift.” The consumer and creditor are becoming more responsible, and while that is a positive thing, it will slow economic recovery though prolonged high unemployment and lower wages.

Several indicators like consumer spending and industrial production continue to decline. Corporate profits are declining at a slower rate while new housing starts have stabilized.

“If we were drawing the letter U, we seem to be at the trough of the U. Whether or not it will be a symmetric upswing remains in question,” Weigand said.

His graphs compare these trends to historical data which shows we could be positioned for a possible upswing. But it is too early to tell.

The media seems quick to herald the few positive signs because people are tired of bad news. Weigand conceded that one of the requirements for an economic turnaround is a change in people’s attitudes. Franklin Delano Roosevelt tried to reassure the populace with his “The only thing we have to fear is fear itself,” speech during the Great Depression. One of Weigand’s graphs addressed investor despair and euphoria. A recent rebound in investor sentiment may indicate we are positioned for an optimistic bull market. But he said there is only a whisper of good news at this time.

Applying the economy to Washburn, Professor Weigand said that while job offers for talented graduates has declined, enrollment in professional majors remains strong as workers seek to make themselves more marketable.

“Think long term. Life is still worth living, it’s not all about economics, being young beats everything. Don’t let the economic conditions derail your dreams,” Weigand said.