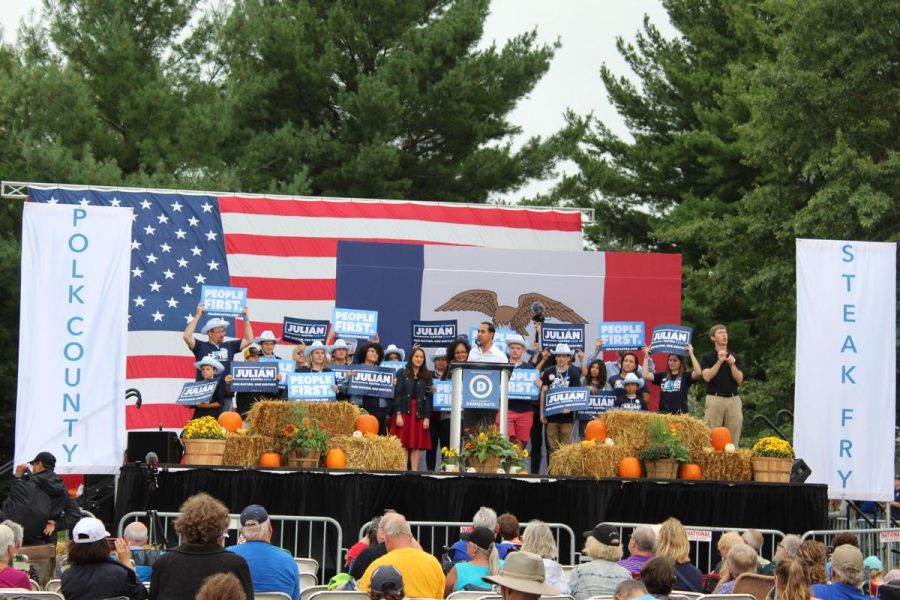 A lot at 'steak': San Antonio Mayor Julián Castro speaks in front of supporters on the Steak Fry stage. Castro is the former secretary of Housing and Urban Development.

Saturday Sept. 21, a number of Washburn University students and Democratic presidential candidates were at Water Works Park in Des Moines, Iowa. They were gathered there to attend the Polk County Democrats 2019 Steak Fry, an annual event that drew over 12,000 attendees to see the candidates for the Democratic Party presidential nomination to go up against current Republican President Donald Trump on Nov. 3, 2020.

“Lucas and I were interviewed by an NBC reporter at the Polk County Steak Fry about our perspectives as students on the candidates,” Smith said.

The presidential caucuses in Iowa are significant because they are the first official voting contests in the presidential primary process to select the general election candidates. This cycle they will take place on Feb. 3 2020.

Many of the students visiting Iowa did so as part of the Iowa Caucus class with Dr. Bob Beatty.

“The class started in 2003 for the 2004 election and it’s been every four years since,” Beatty said. “In 2007 for the 2008 election, they had what was called the [Senator] Tom Harkin Steak Fry. And it was Obama, and Hillary, and Joe Biden. … Unfortunately he [Harkin] retired and the steak fry retired with him. And so they brought it back this year… it’s like the Super Bowl of the presidential primary.”

Beatty was glad to see Washburn students interacting with the candidates and expressed the value of the experience in itself.

“What I really enjoyed this time around was seeing all the students engaging with the candidates, I mean that’s just an irreplaceable experience, not just to study the candidates…I’m at the event, I just literally look over and see [Senator] Kamala Harris, and I’m like ‘oh, there’s Eric [Rorstrom] asking her a question,” Beatty said.

“With a lot of the other events they kind of fell flat for me ‘cause I didn’t feel like they were very personal. It felt just like the stump speech, like I was being talked to instead of talked with. But in the healthcare forum I could feel a connection to the audience around me,” Burrows said. “That’s something I would miss if I just went to the debates or just read news articles.”

Senior political science major, Caleb Soliday expressed that events like these allow students to see the more human side of the candidates and get closer to them.

“We have WTE money that we use to fund these trips. We go up there and we study the candidates,” Soliday said. “We got in with the campaigns, I was able, through connections I have, to work for the [Vice President Joe] Biden campaign and even got at one point on stage with Biden, so that was really cool.”

Getting involved with a presidential campaign does not have to be a mysterious or unobtainable goal.

Upon exiting the steak fry attendees were given a corn kernel to place into mason jars for a corresponding candidate of their choice. Senator Elizabeth Warren won this informal poll, followed by South Bend, Indiana, Mayor Pete Buttigieg.