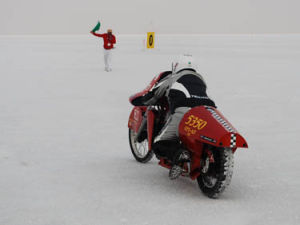 I have two degrees from Washburn and my wife Tucker Allen has one. They have helped us in the workplace but all work and no play makes for a dull Ichabod.

Inspired by the little guy-against all-odds movie, “Worlds Fastest Indian” starring Anthony Hopkins, we decided to pursue the dream of building some old motorcycles to race for land speed records on the famed Bonneville Salt Flats.

Our Washburn University physics class was useful but as professional nurses we are better at medication injection than fuel injection so we recruited a team of friends that included a skilled machinist, a mechanic and an engineer. We found a 1971 Triumph 250cc for Tucker and a 1982 Honda 500cc for me. Both are single cylinder engines designed for low speed power on the trail rather than high speeds on the highway but as the Burt Monro character said in the movie, “Anyone can buy a fast bike, the trick is to make a slow bike fast.”

With a budget tighter than a banjo string we approached the rebuilds from two different directions. The 38-year-old Triumph got an engine makeover with all the racing parts we could find. The 27-year-old Honda got stretched, lowered and wrapped in wind shedding fairings to make it as streamlined as we could. All the work was done by hand in the garages of our team, making do with what we had. Thus our motto, Making Doo, and our name, Speed Team Doo, AKA STD.

After a year of late nights and long weekends, learning skills, solving problems and making a host of new friends, our motorcycles were ready to roll. Our chosen venue was the BUB Motorcycle Speed Trials, an American Motorcyclist Association sanctioned land speed racing event on the Bonneville Salt Flats near Wendover, Utah.

We were by the great barren expanse of the salt flats. Not a blade of grass, not a stone, nothing but snow white salt as far as the eye can see up to and beyond the horizon.

“It looks down hill in every direction,” said our machinist.

We were soon to learn how this tract of salt crust earned the nickname, “The Grinder.”

A teammate brought his 250cc bike and promptly burned up a piston in the thin high altitude air. With a clever and quick repair he went on to set a record in his class. Tucker had set a record in her 250cc class and tried to raise it with an 80 mph run. But her ignition unit gave out and she could not back up her speed with the required return run.

I had my doubts about what my worn-out, oil burning, eBay engine could do without a first gear but I ducked behind the shaped-to-my-form fairing and gunned it down the five mile course. On one run the spark plug came loose, another the muffler was lost and once the carburetor fell off. But eventually it surprised us all with a speed of 102 mph. Delighted but not satisfied I gave it one last, caution to the wind ride. I hit the timing gates as fast as the old dirt bike could carry me only to coast away with a broken engine.

A land speed racing veteran told us, “If you don’t break it, you ain’t trying.” So I guess we can’t be faulted for not trying. Some teams spent a lot more money and went a lot faster. The world record contender fell just short at 350 mph. But no one had more fun or enjoyed greater personal accomplishments than we did.

Between last year and this year our little team holds three land speed records in three different 250cc classes. A big thanks to our local sponsors, the Kickstart Saloon, Freestate Cycle, Sante Fe Trail Cycle, Topeka Harley Davidson and Cope Plastics. We left with broken bikes, a renewed spirit of adventure, smiles on our faces and vows to return.