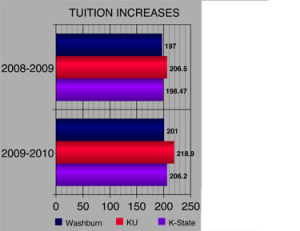 Rising tuition appears to be a trend in Kansas universities. As many have already experienced first hand, traditional undergraduate tuition at Washburn is $201 per credit hour, a $4 increase from last year. Washburn students may not be alone in dealing with a higher cost of education.

The University of Kansas basic tuition for the current academic year is $218.90 per credit hour, which is $12.40 more than the 2008-09 term. Although KU increased tuition by $8.40 more than Washburn did, they have a different method in billing tuition.

“KU actually does a thing where they lock the tuition price for four years. You know what it will cost from day one,” said Ashley Bowser, a KU art major. However there are drawbacks to the tuition compact at KU.

“The tuition compact only applies to incoming freshman, there would be no guarantee that any other type of student wouldn’t see a tuition increase,” said Lois Pinder, accountant at KU’s bursar’s office. Along with no guarantee to new, non-freshman students, there are additional potential costs for KU tuition. “I will let you know that there is a campus fee of $423, which is for everybody, and other individual departments charge additional class fees,” said Pinder. Washburn has a campus fee of $43.

Kansas State University’s basic tuition for the 2009-10 term is $206.20 per credit hour for undergraduate students, an increase of $7.73 from last year. “They always raise it in the fall though, it has been going up every fall for a while,” said Elma Pfaff, KSU administrative specialist. KSU has a flat campus fee of $80.50, and a student fee which is $23 per credit hour up to 12 hours.

“Personally I did not really mind the raise in the student fees. This included the recreation center and the health center and some other random charges. While I did not use all of the services I paid for, it was nice to be able to go to the doctor when I was sick and go to the rec and swim at the pool. We had a really nice rec and natatorium, so I think it was worth it,” said KSU graduate Elizabeth Cobb.

“I’m not worried about it because I intend to work hard and get scholarships,” said Washburn freshman Melissa Duncan. “I think it’s worth the money, I like the small class sizes and plus it’s still cheaper than other Universities around here,” she said.