Encore of ‘Rabbit Hole’ a success 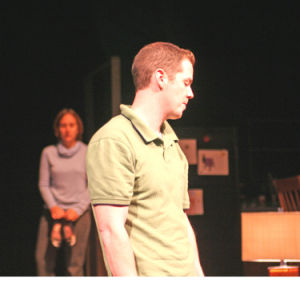 The cast of the theatre department’s production of “Rabbit Hole,” by David Lindsay-Abaire gave a fair portrayal of a family coping with grief. In the play, a couple have just lost their young boy, Danny, to a tragic accident.

The play is not about the accident, however, but the trials of Danny’s family as they try to get over their grief. The cast gave a matinee performance, Sunday, after three nights of portraying the anguished family.

Surprisingly, there were comedic moments amongst the tragedy. And the satisfaction of reciprocated laughter was visible on the cast’s faces; especially Jason Bivens, a Washburn Graduate, who made the script come alive with the mention of a questionably well-gifted bathroom set. While Bivens’ performance was hard to believe towards the beginning of the play on opening night, his gumption strengthened before his forceful outburst at the end of act I when he explodes over a tape.

Heather Prescott was endearing as the character, Izzy-a hot-headed young woman with a flare for the dramatic. Prescott’s finesse as Izzy was notable and her ease with the role made the character believable. She provided a great deal of the comedic relief and could have been perceived as the audience favorite.

Arissa Utemark, however, was the most notable of the cast in her part as Nat. She wore a cap and wig over her hair to mimic the look of a 60 to 70-year-old woman. Utemark’s movement about the set was reminiscent of the character as well as her tone of voice.

The cast ate real food during the play, which was, while distracting, a more believable element than watching the performers mime the act of eating. Bivens drank from bottles of the Jamaican Red Stripe during several moments of the show-twisting off the bottle caps from bottles that must be pried open: a slight inconsistency.

But, after all, the show was amazing. One might have found it hard to leave the auditorium after the melancholy resolution, but as Nat said in regard to the feeling of loss:

“Not that you like it exactly, but it’s what you have instead of your son, so you don’t wanna let go of it either. So you carry it around.”