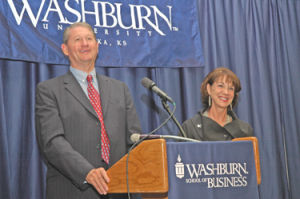 Every Washburn University alumnus aspires to give back to the university. Those former students seek to donate, either through the giving of time or monetary means in order to maintain and raise the standards of the school that gave them education of a lifetime. Richard Davidson is just such an alumnus and he has now raised the bar of giving with his recent $5 million donation to the Washburn School of Business.

Davidson received his degree from Washburn University in 1966. He moved forward in the business world, eventually making good on the promise of the education he received from the school he has now given back too. The former Chief Executive Office of the Union Pacific Railroad currently resides in Florida with his wife Trish. “The money given to us by Mr. Davidson was very generous and this is not his first donation,” said Washburn School of Business President Dean Sollars, “so he and his wife have been very giving over the years.”

Donations are crucial to schools now more than ever as they struggle to make ends meet. When those donations typically aren’t enough it doesn’t matter how many students a school has or how high the tuition rate is; they all share the burden of needing funds from the state. Those funds may not come in the form of direct payouts but they are still given. Case in point is the Kansas Partnership for Faculty Distinction program. Assembled in 2000 by the Kansas Legislature, this program was created to “encourage gifts by private donors to establish professorships to attract and keep top-notch faculty.”

The associate director of communications for the Kansas Board of Regents, Vanessa Lamoreaux, said “we do have specific information on our Web site, kansasregents.org, along with a professional report. This provides overview of the program.” What the Web site doesn’t really say is that the program tries to match the funds that are donated to schools, at least by a certain percentage.

Washburn University is one of many schools across the nation seeking to increase endowments, if not only to better their own programs and to combat broadening inflations of tuition. This is a time where every school, from community colleges to Ivy League institutions, are doing their utmost to raise every penny they can in donations and other gifts.

The Kansas Partnership for Faculty Distinction Program allows for matching funds to be made available by the state of Kansas. “It’s a partnership with the universities, so if we can identify private investments, the state will match some of the earning funds,” said Mazachek. Apparently those matching funds will also go towards the professorships and the chairs.

Unfortunately, it is never a simple matter of distributing the funds. Whether a small donation or a high amount such as the Davidson donation, there are factors when considering how the recipient actually receives the funds. “Basically, we won’t get the money right away in lump sum format. The way it works is fairly complicated by we end up receiving payouts. The money is deposited through the WEA, and they control it from that point. Eventually, we receive payments amounting to about 5% interest from donation,” said Sollars.

All in all it could be a little while before the business school sees any actual funds from the donation. Even the percentage received on behalf of the Kansas Partnership for Faculty Distinction may take between three and four years to go in to effect. “I think this is a real compliment to the Washburn foundation that they have a donor of this significance giving this much money,” said Frank Chorba, “as well as a great reflection of Washburn’s maturity.”

In addition to his recent donation, Davidson has also previously offered up the Thelma Ann Davidson Memorial Scholarship in honor of his mother. Despite the scholarship, the $5 million is his greatest gift yet and it comes at a time when Washburn University is feeling the financial crunch of the current economic downswing. When the university, and almost every other across the nation, is suffering through tuition spikes and a desperate need for fresh resources, Davidson is sending a wind of new hope through the Washburn School of Business. None of the financial haggling has dampened the business school’s enthusiasm over this amazing opportunity.

“This is a fantastic opportunity for the Washburn School of Business, and we are very excited,” said Sollars.

With this new donation, as well as the additional state interest match, the Washburn School of Business can continue to offer students superior academic standards and fantastic professors.

Other schools may routinely receive endowments in excess of $5 million. This staggering sum is a boon for Washburn University, and the Business school is thrilled to have received it. “This is the largest donation that Washburn has ever received and it’s just so great. It feels like icing on the cake,” said Sollars.