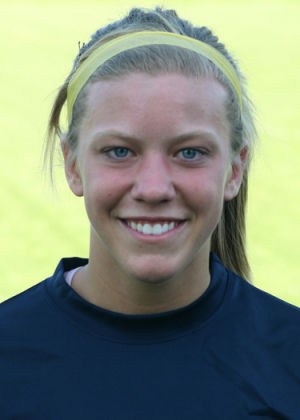 Whitney Drane, freshman, isn’t sure how her injury happened, but it means she will have to sit out the fall season.

“I was playing and all the sudden my foot started hurting,” she said, “I had broken a bone off of the side of my foot, the pinky toe.”

Drane said the pain started during her freshman year of high school.

A year later, a doctor put a screw in the side of Drane’s foot to hold the bone together. The injury was expected to heal but it didn’t. Last year, Drane visited a different doctor who reattached a tendon, and fitted Drane with a boot, which made playing soccer impossible. The boot came off yesterday, but the 5’4 defender will still be the only red-shirted player for the rest of the season.

Typically, several freshmen are red-shirted for their first season. Drane, however, is the only one, and only for medical reasons.

While she won’t be able to run until Oct. 10, her recovery is well under-way.

“I am going to have to put in these gel in-soles for more padding in the bottom of my shoe.

“I’ve been doing ab training and throwing medicine balls,” said Drane. “I’ve started working on my headers. I don’t think it will set me back because the rehab might make my legs stronger.”

For now, Drane supports her team on the sidelines.

“If I’m standing on the sideline I can see what the defense is doing, I can give them tips during halftime.

“It was very disappointing to find out I couldn’t play,” Drane said, “It makes me want to come back and work ten times harder. I deserve to play and I want to show everyone I can play at the collegiate level.”

Drane graduated from Washburn Rural. As a senior, she earned first team all-state, all-region, all-league and all-city honors for the Junior Blues. She was also named coach’s player of the year. Academically, Drane is a four-time member of the honor roll and a member of the National Honor Society.