Ichabods set for showdown with Highlands 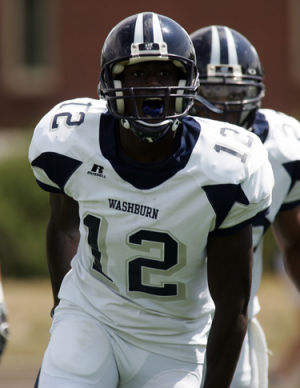 Next Friday under the lights of Yager Stadium the New Mexico Highlands University Cowboys will come to Topeka to do battle with the home town Ichabods.

This will be the first home game of the year for the Ichabods as they embark on the 2009 home schedule with hopeful optimism. Having returned many of the starters on offense, Washburn head coach Craig Schurig feels that all the preparation from earlier this spring will show up in their upcoming game.

“We had a great spring practice and conditioning season and feel like we are a deeper team this year,” said Schurig.

In contrast, the Cowboys of New Mexico Highlands are coming off a rebuilding year in which they finished 3-8 last season. In particular, the Cowboy’s defense bore the brunt of the season giving up nearly 175 yards a game on the ground and over 200 yards a game through the air in the passing game.

All of this couples with a head coach in Chad Roanhaus, who is entering his second season as head coach at NMHU, having stocked up the roster with a large class of more than thirty incoming freshmen means good news for the Washburn ground attack led by returning leading rusher, Justin Cooper, who has already vowed in the preseason to eclipse the mark of 2,000 yards rushing.

What the Ichabod defense should see from the Cowboy offense will be the aerial attack of returning quarterback Narciso Diaz, who has emerged from his backup role during the spring as the starter for this season. In addition to the passing attack, which NMHU leaned on heavily at times last season, Coach Roanhaus will use the prospects for a more dynamic running attack utilizing the three main backs who have been vying for playing time, Robert Grant (5’9, 170), Brandon Torres (6’0, 190) and Eric Dyer (5’9, 180).

“Our running back trio is great,” said Roanhaus in reference to the three running backs the Cowboys will feature this season.

Special teams however, might be where Washburn holds the most decisive matchup. Washburn last season produced nearly twice as many yards in both the kickoff and punt return games than NMHU and are bringing back the primary kick return weapons as well as bringing in new kicking talent to help bolster what was already an accomplished special teams unit.

“Our kickoff return, place kicking and punt return units will be solid as always,” said Schurig.

In all, this early matchup of two teams in different places of program development ought to be the beginning point for what needs to be done and what the season will hold for both teams.