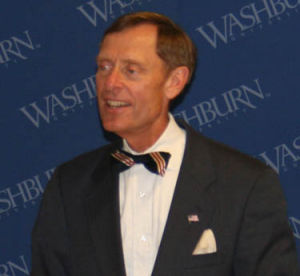 The Board of Regents ended a seven-year run of self-funded healthcare for Washburn Friday with a decision to have faculty and staff assist in paying their premiums.

In the past, Washburn University has paid the full premium for its employees. The new policy means that employees will pay part of their premiums, a higher deductible and more for office visits. The policy has also raised the cost of brand-name drugs to $10 for employees, but generic drugs will remain at $5 in an effort to “encourage the use of generic drugs,” said the president Jerry Farley.

Farley recommended these changes to the Board of Regents as a reaction to the current “recession economy” because Washburn University’s goal is to make increases that will put at least $25 million back into reserves. Also new is the fact that employees are no longer required to have a plan from the university coverage. If they prefer, they can shop around for a cheaper plan, but they would have to pay for it entirely out of pocket.

Harold Rood, chair of the philosophy department, said on behalf of the professors, “Nobody likes it. If you were to say how many people were in favor of this, I would have to say ‘no one.'” He said they were concerned because this adds one more bill they have to pay.

Michael D. Haze, union president, said that although many faculty and staff members are disappointed about the new policy changes, they aren’t surprised.

“It is deplorable that we’ve had to increase these costs, especially in a year in which we have had no pay increase,” said Farley.