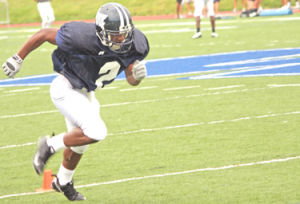 Setting goals high is important for any task in life, and Washburn Ichabod starting running back Justin Cooper agrees. For the 2009 season, Cooper set the goal of 2,000 rushing yards, something that’s never been done before.

“It’s a big goal,” said Cooper, who rushed for 539 yards in 2008 in eight games with three starts. “Some people look at me like, ‘hey, you’re crazy.’ But you got to set your goals high. So you know, I’m just trying to reach the goal or at least get close to the goal. It’s a big goal. If I just keep working hard like I’m trying to do, I might not get it but I’ll probably get close.”

Cooper, a sophomore, is off to a decent start after two games, having 170 yards rushing.

While coach Craig Schurig said he focuses more on team goals, he is glad Cooper set the goal he did.

“… I like those guys to have those kinds of goals because that means they’re expecting to do well,” said Schurig, who has coached two Washburn running backs who have twice had 1,000-yard seasons. “So it’s good to have goals like that.”

In week one versus Colorado School of Mines, Cooper earned 136 of the team’s 257 rushing yards while last week versus New Mexico Highlands, the ball was spread out among nine tailbacks for 284 yards, 34 of which Cooper accounted for. It’s pretty evident that the Washburn ball carriers play a crucial role in the offense.

Other key running backs on the team include juniors Donte Bean and Terrence Lowe and redshirt freshman Vershon Moore. Senior fullback Brad Haug said he is going to do his best to help him get the goal, but knows as well that all those guys want the ball too.

“I mean I think he can definitely do it but it’s going to be a high mark to hit just because we have other talent,” said Haug. “We have depth. And I don’t know, just the variety of the tailbacks that we’ll run, he won’t get to see quite as many carries just because all the people we have that can run the ball.”

So far this season, Cooper has carried the ball 22 times and is averaging 7.7 yards per carry. One big carry in the season opener for 78 yards and a touchdown really helped his cause.

“It’s like an instinct thing,” said Cooper who has made it into the endzone twice this season. “I’ve been playing football all my life and like once you hit that second gear, it’s like you’re going to score or you’re not going to score. I think it was just hard work. I’ve put in a lot of hard work this summer and one my other goals is to finish my runs stronger, you know, try to finish into the end zone, and I believe all that stuff paid off.”

Cooper knows that he’ll need a few more big runs like that as the task is going to be tough but said each week he is just going to try and do better and get more yards than the week before.

“Even if I don’t get it, hopefully we can reach it as a group.”