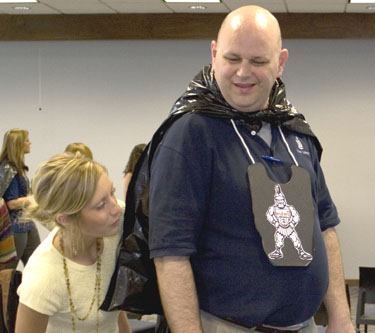 Out of my way! Alan Bearman, interim-dean of the Mabee Library, uses his cape-clad frame to make the competition harder for his opponent. WU Gladiators was one of the four "Win Big With Washburn" events being held to raise money for the University. Photo by Cody Lohse.

Washburn faculty, staff, Endowment Association of Trustees and the board of regents came together to make fund raising fun and community-oriented as they competed in “Ichabod Gladiators” last Thursday, one of the events in the “Win Big with Washburn” 2009/2010 faculty/staff campaign.

The event was loosely based on “American Gladiators,” a television show full of buff women and men competing in very physical competitions. The event was still competitive, but names like “Rocket” and “Venom,” were replaced by members of the Washburn faculty and staff. Teams of three competed and even burned off the complimentary cookies, pretzels and party mix while playing Wii fit games Ski Jump, Table Tilt and Tight Rope Walk. The already difficult tasks were made even more so as gladiators attempted to throw them off their game.

Kelly Mourning-Byers of Criminal Justice and Legal Studies, possibly disappointed a few of these distractions as she laid out the rules,

“There will be no hand to hand combat,” she said.

Fun was had by all, but especially by the Washburn Wu Wü gladiators. The Wu Wü gladiators included Alan Bearman and Keith Rocci of the Mabee Library and Emily Rischel of Academic Affairs. Their weapons of choice, brightly colored jelly and rubber balls, were used to distract contestants. Often “accidentally” hitting the laughing competitors on the Wii boards.

As if that wasn’t enough, the competitors had to adapt to the “No jumping on the Wii board” rule, especially hard for the Ski Jump, and some competed barefoot after the Wii board refused to cooperate with high heels.

“Tell the big guy to move out of my way,” said Jami Herl of the Washburn Endowment Association, as she attempted to see the screen during her turn on the ski jump.

Gladiator Bearman was the “big guy” in question as he used his size to his advantage, blocking out most of the television. Everyone in attendance enjoyed the games, the antics of fellow employees, and even trying out new technology with the Wii system.

Ichabod Gladiator is the second of four “Win Big With Washburn” events that make participation in the 2009/2010 faculty/staff fund raising campaign more about the employed Washburn community getting together and having a good time. The fund raising effort will supply money for unanticipated expenses not included in the budget. The money often helps out facilities, staffing, scholarships, technology and help fund programs. Anyone is allowed to donate and can choose where their money goes.

The game-show-themed events this year aim to physically involve more people and make it a enjoyable campaign.

“We are hoping to increase participation to… 50 percent this year,” said Julie Olson of the Washburn Endowment Association.

Last year the campaign followed a superhero theme such as “Bodman” with Batman and Robin flavor that brought out 46 percent participation.

“It’s wonderful,” he said. “It’s a really good thing we do here at Washburn. [It] shows how much the faculty and staff care about Washburn. It’s a great institution.”

The campaign divides the university into teams, the winning team will proudly display the traveling trophy until next year’s competition and be honored at a special luncheon. The campaign ends Friday Sept. 18, 2009. For more information or to donate go to www.washburnfacultystaff09.com.