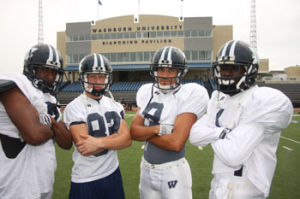 Time stops for no one and it keeps marching on is the old saying.

That holds true for the wide receiving corps of Drameagon Powers, Brad Cole, Joe Hastings and Lloyd Bias. The quartet of upperclassmen have been developing the unit chemistry over the last couple of seasons and they feel like the right mix will show itself on the field this year.

“We want to be the most explosive wide receiver corps in the MIAA this season,” said Bias, junior wide receiver.

If statistics are the measure of a player’s success then this unit is indeed poised to take the next step in its progression of offensive production. Powers and Bias have seen their catches and yards go up steadily since arriving at Washburn as freshmen. As they have progressed, the receivers have developed skills as players that have transferred into production on the field.

“Reading coverages is where we have improved the most,” agreed both Powers and Hastings, senior wide receivers.

Those developed skills have also translated into a comfort level for the quarterbacks in their production as well, evidenced by the results in the almost 2,000 yards that Washburn quarterbacks threw for in 2008.

The 2009 season however has taken off from a receiving standpoint as well with starting quarterback Dane Simoneau, finding targets at a strong pace, averaging roughly 12 completions and over 165 yards per game.

In particular Hastings and Cole have emerged as two of the favorite targets. Both are currently averaging more than 20 yards per catch and accounting for half of the receiving touchdowns thus far this season.

“In the spring Joe and Brad have really stepped it up,” said Craig Schurig, head coach Washburn football.

Especially in the case of Joe Hastings, who stepped into the lineup as a true freshman and has since turned into one of the offenses’ top producers.

“Joe as a raw-talent true freshman has developed the most since coming to campus from a standpoint of where he was to where he has gone talent wise,” said Schurig.

“Learning a college offense out of high school is a challenge since things are moving so fast,” said Schurig. “Their development has made things easier for us to install more subtle wrinkles in the offense this year.”

Indeed, all the players have made great strides since coming to Washburn as freshmen. All of them have worked persistently to be the best players for the team that they can be.

“Any of those guys has the tools to take over a game,” said Schurig.