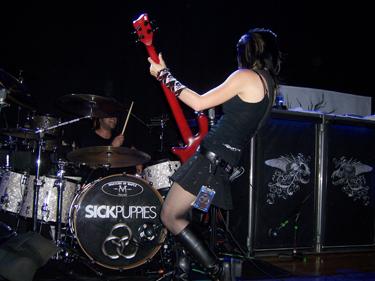 In Concert Emma Anzair, bass players for the Sick Puppies, rocks out at the Granada in Lawrence. The band gave a powerful performance during Thursday's concert. Photo by Ashley Rafferty, Washburn Review.

Mass Street in Lawrence was buzzing as the Granada had yet another solid line-up. First on stage was a local band from Overland Park, Kan., called Black Oxygen. As winners of the 2006 Club Wars, they have already started to make a name for themselves. However, they did not have a very good stage presence. For the most part, the members stood in the same spot and maybe had an occasional head bang. This could have been due to the lack of stage space, or it was their personal style. Nonetheless, the band has a great sound with the distinctive blues voice of Grant Apple and the award winning guitar player, David Lyle. Their next show will be at the Aftershock Battle for Freaker’s Ball Semi-Final in Merriam, Kan., Sept. 18.

The Veer Union, from Vancouver, British Columbia, came on stage with a great energy that lasted through their entire set. This band sticks out with their harder style and sound, while maintaining a positive attitude. The lead singer, Crispin, sticks out because he has some killer stage moves and a gigantic Mohawk. He is a truly amazing vocalist and knows how to please the crowd. TVU is really a good group of guys.

“Every song we write about is about hope, whether it’s about hoping to get the girl back, being in a better place, or not being spiteful or cynical. Veering away from the dark and into the light,” they said. The band formed in 2004, and is definitely a must see. They will be performing with Buckcherry at the Beaumont Club in Kansas City Mo., Sept. 19, and Omaha Neb. at the Sokol Auditorium, Sept. 20.

When The Sick Puppies walked on stage one could feel the excitement sweep over the crowd. Even though Hurt was the closing band, the pups were who most fans came to see. They played “All The Same,” “Going Down,” and even did a cover of Destiny’s Child’s “Say My Name.” This band was amazing, but what stood out most was how much Emma Anzair, bass, truly rocked out. She never stopped moving unless she was singing back-up. She made the set interesting to watch and got the crowd pumped up. This band really gets into their music, and this concert showed how much the fans were into the band. At the end of their performance, a girl got a water bottle from lead singer Shimon Moore and left the show saying- “My future husband’s mouth was on this.”

The night ended with Hurt from Virginia. The entire show was pretty good, even though the crowd was pretty small, given it had to compete with the ETID show in Kansas City. Andrew Vohs, Paola, Kan., said about the show, “It’s bad ass! I wish the crowd would have been better.” He also said that more people need to support smaller bands.