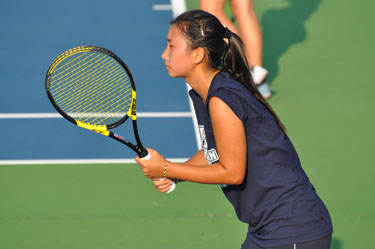 Early bird Senior netter Trang Le Nguyen and the Lady Blues were in action last Friday and Saturday mornings at the WU Invitational.

The Washburn Lady Blues opened the 2009-10 slate with the Washburn Invitational and Whitney Zitsch taking the B flight championship. The duo of Trang LeNguyen and Morgan Rainey won the doubles title.

LeNguyen and Rainey topped Northwest Missouri’s duo in the final 8-2 and Doole and Zitsch won the consolation final.

The Washburn Ichabods opened the 2009-10 season at the Washburn Invitational with Ryan Ward taking the top flight and Adam Rens winning the B flight.

Ward won the A flight at the Washburn Invitational while Simon Blondin shook off a first round loss to come back through the consolation bracket to take third place in the top flight.

Rens topped Giovanni Auricchio from Northwest Missouri 6-2, 6-2 in the finals and Yann Kasay topped Tyler Zappia from Emporia State in the B flight consolation match.

In the C flight, Ichabod newcomer Emmanuel Laurent was topped by Calvin Patterson 6-4, 6-1 in the finals.

Ward and Blondin fell in the finals of the doubles championship.

The Ichabods and Blues will be back in action Sept. 11-13 at the Wichita State Invitational.