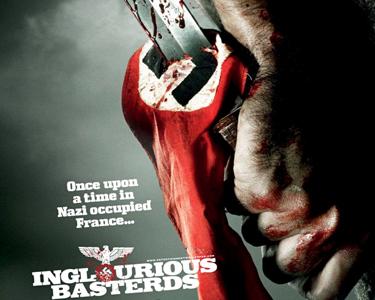 When I scanned the show times this weekend, I was a little disheartened, to say the least. The releases for this Friday were actually so unappealing I would not have reviewed them even if they paid me (which, come to think of it, they do). A few of the more interesting films I hadn’t had time to see were already bumped off after two or three weeks to make room for more B-grade horror films.

Despite my distaste for excessive gore, I found myself seeing “Inglorious Bastards.” Now, I will admit I have never been a great fan of Tarantino’s work, with the exception of “Deathproof,” but I suspect that if you are a real fan of his you have probably already seen his latest movie anyhow.

I should say right off of the top that this movie has no historical accuracy, or tact. Par for the course in Tarantino’s work, the movie alternates between bursts of sadistic violence and long, drawn out conversations that have nothing to do with the story, but drive most critics inexplicably wild. Conversations like that, incidentally, are the sole reason this movie lasts nearly three hours instead of an hour and a half. Also in keeping with Tarantino’s style is a terrifically well-made, albeit out of place, soundtrack that perfectly captures the tone of what’s going on in the film.

I do have to give credit to the film’s attention to linguistic accuracy, opting to have lengthy subtitled conversations in French or German rather than have every character inexplicably speak English (I’m talking to you, “All Quiet on the Western Front”).

In regards to the plot itself, it was fairly straightforward: a team of Jewish-American soldiers were dropped into France to kill Nazis and scalp them. While there, they are given a mission to blow up a theater premiering a propaganda film which most of the Nazi high-command, including Hitler, will be watching. By a strange twist, the theater that is showing it is owned by a Jewish woman who only just escaped capture four years prior, now living under an assumed identity. This woman, incidentally, has decided to lock the doors and burn the building down as vengeance. I do not normally say anything about the ending of a movie, but to the dismay of written history and good taste, both plans work. Hitler dies, burning alive and getting shot in the face over and over again. Then the movie ends.

In all honestly, I cannot give you a reliable recommendation as to whether or not you should see this movie because I cannot decide if Tarantino just wrote a very cathartic piece of fiction wherein Hitler got what he deserved, or a horrible mockery of a tragic time in our world’s history, and a slap in the face to anyone unfortunate enough to have been a part of it.