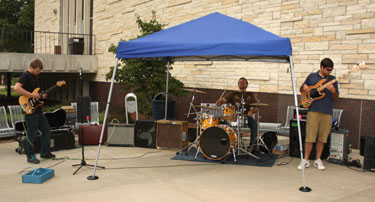 Members of the Brody Buster Band have been playing together for nine months-the term of a pregnancy-and they birthed their musical love-child on Thursday when they opened up their set under cloudy skies and the threat of rain.

The band was the featured entertainment for Scorch on the Porch, an event held by the Memorial Union several times each semester. So the band’s bluesy-rock resonated across the lawn for an hour, interrupting the somber sterility of Washburn’s campus.

Brody Buster, 25, led the band on vocals, guitar and bristling harmonica solos that proved to be the highlight of the band’s show. He might be recognizable to many fans as the young harmonica player who once appeared on the Tonight Show and opened B.B. King’s Blues Club in Los Angeles. Buster was also a regular performer at the Kansas City Blues and Jazz Festival at the old Grand Emporium during its prime.

Chris Handley, 31, plays a cool bass guitar that echoes his cool nature. And drummer Tommy Dimmel, 25, beats off a sarcastic tempo. Dimmel has been filming the band’s experiences on a digital video recorder. The purpose of the recordings, he said, has been to document peculiarities during their shows.

“To capture how pathetic this is to be doing as a living,” he said. “The music is just the eye of the storm. It happens and, honestly, it’s hilarious.”

The only element missing on Thursday was Jeff Nelson, the band’s tambourine player. Nelson was busy delivering pizzas at his second job. However, band members said that providing the sexual energy during shows was Nelson’s most important role.

The Brody Buster Band’s set list calls on original material as well as some recreations of Muddy Waters, Howlin’ Wolf and Little Walter. But which song is to be played at what time is left to improvisation.

“When I was young, I was led to believe that a fat man with a beard and a red suit came down my chimney every year and put presents under a tree,” said Dimmel. “That’s what this band is all about-believing in the magic.”

And the magic can be witnessed again Saturday at Barley’s Brewhous in Midland or Sept. 12 at the Lawrence Brew Fest, Clinton Lake in Lawrence.

Grant Robertson, an integrative studies major, said the band is good, and he should know. Robertson grew up within walking-distance of the old Grand Emporium, where he heard some of the greats play during his childhood.