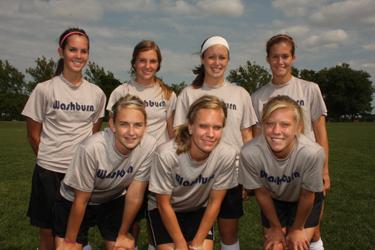 Washburn Lady Blues volleyball head coach Chris Herron has a tradition of finding the great players and bringing them to Washburn. And this season, it’s no different, as the team welcomed four new freshmen.

The four newbies-Jessica Fey, Tessa Brophy, Jessica Kopp and Hillary Hughes-are all from out of state and all received playing time this past weekend in the team’s 4-0 start. Three other freshmen-McKayla Gowen, Abby Wittman and Sami McHenry-are being redshirted this season by the Lady Blues.

“I think all are bringing something to the table, I don’t necessarily think one sticks out,” said Molly Smith, junior. “I think they’re all really, really good players and that they definitely have made our team a lot better.”

Tessa Brophy, a defensive specialist/libero from Papillion, Neb., said Herron recruited her after coming to her high school state finals match last year. She played the first match of the season for the Lady Blues at the DS/L position against Western State on Friday, and said it went well and was a lot of fun but she’s still trying to improve.

“I’m still learning a lot, like all of our plays and defenses and stuff,” said Brophy. “It’s just nice to have other people there who are going through the same thing.”

Hillary Hughes, an outside hitter from Black Earth, Wisc., also has enjoyed her time on the team.

“I love it. It’s been really good so far,” said Hughes. “All the girls are super nice and inviting and we’re all getting along really well.”

Hughes played in three of four matches last weekend and said while she is still trying to get used to the heat of Kansas, it didn’t take long to get on the same page with the team.

Jessica Fey, a middle/right hitter from Crete, Neb., who played in one game in the first tournament of the year. And she said the biggest thing for her is just getting used to coach Herron and her teammates.

“Personally, it’s just a lot of new things that I’m not used to that coach wants us to do,” said Fey. “So just adjusting to that. And getting over the frustrations of not knowing everything right away.”

The fourth freshman on the WU team is Jessica Kopp, from Lee’s Summit, Mo., who said the team gave her someone to hang out and bond with, because no one else at WU was from her high school.

Kopp, an outside/middle hitter, got to start in one of the matches this past weekend.

“I love volleyball and I always wanted to play in college,” said Kopp. “This just felt like a great place for me to do that.”

Kopp also said that she’s enjoyed spending time and learning the ropes with the three other new Lady Blues players but wanted to emphasize preparing for the upcoming tournament.

“It’s really important that we focus in practice this week and make sure we get all the kinks out that maybe we found last weekend because it was our first time actually playing together,” said Kopp.

The Lady Blues will next play at 1:30 p.m. Friday and Saturday against East Central in Denton, Texas, as part of the Texas Woman’s University Varsity Tournament. They’ll cap out the evening at 6:30 against Texas Woman’s before playing at 9:30 a.m. against Texas A&M-Kingsville and at 2:30 p.m. against Southwestern Oklahoma State.