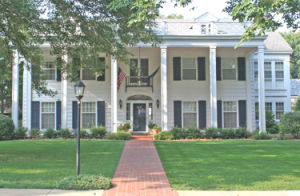 Thirteen years ago, when Jerry Farley became president of Washburn University, he and his wife Susan began their Roundtable Discussions.

The president said that they began these dinner/discussions to be able to interact more closely with students in an environment that is a little more relaxed, but stimulating and intellectual as well.

The process of organizing a Roundtable Discussion begins with the topic. The Farleys make their selection, then select a faculty member to act as a fascilitator of the discussion.. This faculty member introduces the topic to the guests and provides them with a few thought-provoking questions to think about and discuss during dinner. Dinner brings small groups that later come together to share and discuss their thoughts.

Topics are generally chosen based upon current events. In the past, topics have ranged from gun control, to hate groups, to wellness to tax dollar being used for bailouts. Students are both chosen at random by Farley, as well as invited by facilitators, who may also be their teachers.

Farley said that he and his wife always hope that everyone will hear something new from what they always thought, that they’ll process it and that participating in the roundtable will either broaden their thoughts, or change how they have always seen a topic.

“Susan and I are regularly surprised with what people say because all of us have stereotypes and opinions,” said Farley. “When people don’t fall into these categories, we’re surprised. It’s refreshing.

Last fall, Bethany Whitehurst, sophomore, attended a roundtable on Muslims and the Islamic faith. Whitehurst was standing outside of the Living Learning Center one evening when Farley and his wife happened to be leaving the Memorial Union. After chatting for a while, they extended an invitation to her and her roommate.

“This dinner ended up being nothing like what I expected,” said Whitehurst. “I was fortunate enough to have the guest speaker in my discussion group, and I thought that it was very enlightening.”

The Roundtable Discussions are planned two to three times a semester, around other campus events and activities. Students who have been invited are contacted via telephone or e-mail, and asked to RSVP.

If students are interested in attending a Roundtable Discussion they can contact the President’s Office at (785) 670-1560, and ask for Lisa Ille.