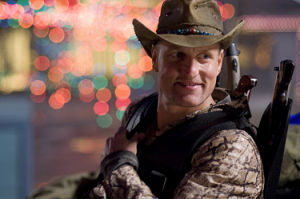 When “Zombieland” finally came out last weekend I couldn’t wait to see it. Not because I had necessarily heard good things, but because it had been running frustratingly vague trailers for months longer than most ad campaigns and I was getting tired of waiting to find out if it was awful or impressive.

Now I will grant you that regardless of its quality, we needed another zombie movie about as much as another story about vampires who don’t kill people, well, not quite. But the cast was not entirely unlikable and if I never watched zombie movies I wouldn’t be able to appreciate “Shaun of the Dead.”

“Zombieland” carries on the long-standing tradition in zombie movies of having no real outstanding plot besides survival; it is basically an hour and a half of four people running around shooting dead folk and trying not to die under Jesse Eisenberg’s mildly informing narration. The main character, Columbus (Jesse Eisenberg), stakes his survival on a series of rules that still have trouble accounting for how a social outcast with an irritable bowel and poor hand-eye coordination made it this far.

As I said, there isn’t too much that goes on besides an uninspired love interest and a terrific cameo from Bill Murray. I actually spent the majority of the film musing on why the story was focused on the least interesting character in the movie, and how Emma Stone and Abigail Breslin’s hair was so clean and perfectly styled when they said they hadn’t showered in ages. Still, it is a little unfair to judge a comedy about zombies on its accuracy.

When reviewed from a comedic standpoint, “Zombieland” does not come off too shabby. The film definitely doesn’t drag you down with the depressing reality of the situation or the bleak chances of survival these people actually have, something even “Shaun of the Dead” struggled with. But any parallels drawn between these films are unwarranted, because despite several rumors I’d heard to the contrary, the only similarity is that they are both comedies involving zombies. “Zombieland” finds most of its laughs in Woody Harrelson’s violently bloody quest for snack cakes and Jesse Eisenberg’s ability to land a woman within an hour and a half of soiling himself.

All-in-all, “Zombieland” does not actually try that hard, and doesn’t really need to. It’s a fairly effortless and blessedly brief flick that lets you enjoy it mindlessly without insulting your intelligence.