Washburn win not pretty in pink 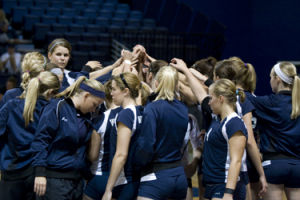 Almost every time the Washburn volleyball team wins a home volleyball game, it stays out on the court to celebrate with friends and family. Tuesday night after they defeated Northwest Missouri 3-1 on PINK OUT night in Lee Arena, the team went straight for the locker room for about 10 minutes, showing clearly something wasn’t right.

“We didn’t play very well. I’m going to tell you that,” said coach Tim Herron when he came out. “Before I even look at our stats, I know that our ace to error ratio was very poor.”

“We would score four points, and then miss a serve,” said Herron. “There’s the old adage you shoot yourself in the foot, and that’s what we did nine times. So there’s no flow to the game when you go one to nine.”

In the Lady Blues’ three set victories, they only trailed once. It was in their one set loss that they trailed five times with 12 ties.

On the evening, the Lady Blues had five players get 10 or more kills including three Washburn players with double doubles.

Ashley Shepard and Mollie Lacy had 13 kills on the evening while Hilary Hughes and Breanna Lewis had 11 and Jessica Fey had 10. Kate Hampson led the way in assists and digs with 54 and 14 respectively while Molly Smith had 12 digs, Hughes had 11 and Shepard had 10.

“We spread the ball around,” said Herron, the eighth-year coach. “We had five kids get double-figure kills. We should just be beating people. When you get five kids in double figures, you should be winning fairly easily and I just thought that we kind of let them hang around.”

The Bearcats lost their head coach Anna Tool last week after she resigned because of news that Northwest wasn’t going to renew her contract. Her assistant Allison Rogers was named interim volleyball coach in her place. Herron said because of those circumstances, the team didn’t have anything to lose.

“With the adverse situation they’re in, like their current coach said, ‘We don’t have anything to do except to go play.’ And I think that’s the way they played,” said Herron. “There wasn’t any uptightness to them. They were kind of loose and just played.”

The Lady Blues next play No. 19 Truman State at 7 p.m. on Friday in Kirksville, Mo., before playing Missouri Western at 7 p.m. on Saturday in St. Joseph, Mo.