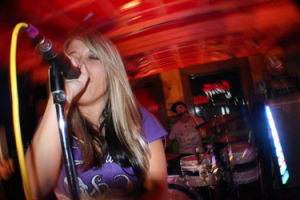 In the midst of artificial fog and colored lights, Blameshift, an upcoming New York band, rocked the stage at PJ’s Pub home of Manhattan’s music scene.

Just a few weeks into their fall tour they continue to amaze the masses, adding more and more people to their fan list. The stage presence presented by Blameshift was powerful and fun and had explosive energy levels. Blameshift is a more rock related band, but could be compared to Paramore without the pop flavor. This was their third time playing at PJ’s, where they bring new music each time they play.The previous day they played a show at the Boobie trap here in Topeka. (story continued below)

“The owner was really cool and the sound in the building was awesome,” said lead singer Jenny Glickman.

Blameshift is a four-piece rock band from Long Island, N. Y., that consists of lead singer Glickman, Tim Barbour on vocals and lead guitar, Joe Meyer as bass, and James Miller on drums.

They released their first full album “The Test” in May 2007 and played dates on the Warped Tour in 2006 and 2008. Also, in 2007, they were featured in Alternative Press magazine for winning unsigned band of the month.

Over the past winter they recorded a new “extended play” and put three new songs on Myspace. This will act as a teaser for the full album they plan to release this spring. After touring solid for the last three years distributing product and demos, Blameshift just finished up their Girls vs. Boys Tour with The Material, a band from San Diego, California, transitioning to the Cash for Punkers Tour with Sky Tells All, from Pensacola, Fla.

After the tour they will continue to work on their new extended play and talk to some bigger labels.

“We love Kansas. We’ve met so many new friends here,” said Tim Barbour You can find Blameshift on Facebook, MySpace, and Twitter. Check them out at www.myspace.com/blameshift