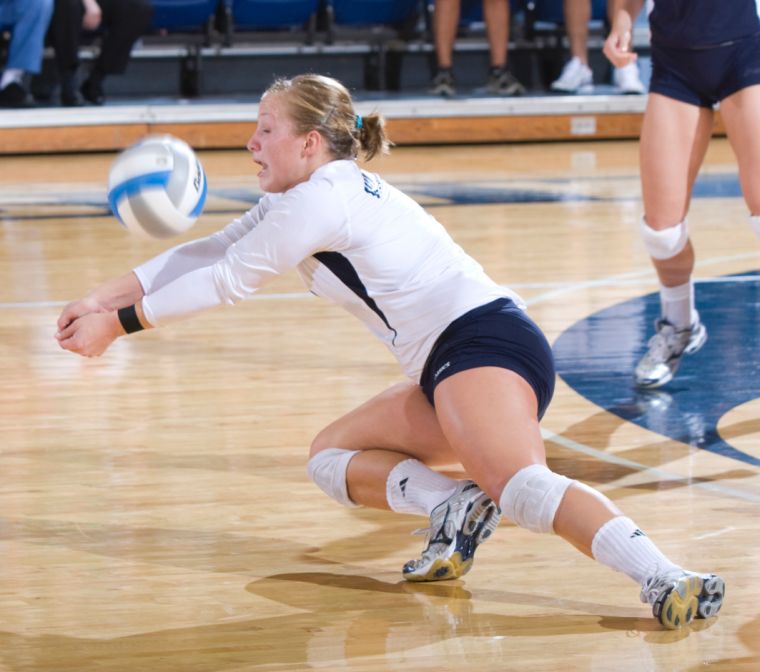 Playing at home is usually an advantage. And despite a rare home loss for the Washburn volleyball team last Friday versus top 25 MIAA foe Central Missouri, the Lady Blues still consider Lee Arena a tough place to play.

“We were really upset,” said Jessica Wade, sophomore middle hitter. “We had higher hopes and a standard where we don’t like to lose at home.

“We’re hoping for a recovery and a turnaround.”

With only two losses for Washburn in the last three seasons on its home court (the other being a NCAA tournament semifinal loss to Western Washington in 2007), the ninth-ranked Lady Blues look to restore order this Friday and Saturday when they host the Holiday Inn Lady Blues Regional Crossover Tournament.

“It should be some good competition. I know there’s at least one ranked team that’s going to be in there that we’ll get to play [No. 6 West Texas A&M],” said Jennifer Kolarik, sophomore outside hitter. “So it’ll be good to get away from conference and that stress and everything. It’ll be a good chance to show that we’re still up to the competition.”

While the Lady Blues (15-2, 3-2) are just as good on the road, home cooking is always better, and the team knows Lee Arena like the back of its hand.

“It’s easy when you get to stay at home, sleep in your own bed, so you’re in your own element,” said Kolarik. “It’s not like you have to get off the bus and get ready to play. It’s fun to play in front of your own crowd and everybody you know. We’re used to this gym, we’re in here all the time. So it’s good to be in our own place.”

Herron agreed, saying that Washburn fans were some of the greatest in the conference and that Lee Arena is truly home sweet home.

“I think the biggest thing is you’re in your surroundings, in a gym you practice in everyday,” said Herron, who is 92-13 all time in Lee Arena. “You know what the temperature is and what the court feels like. The other thing is we get crowds here. You know you go to other schools and they don’t get anything like the MIAA gets.

“The crowds at Washburn are a lot of fun to play in front of. And we got to have that on Friday night when we play West Texas.”

The Lady Buffs, who are also 15-2, are a member of the Lone Star Conference and are in the South Central Region with the Lady Blues. The two teams will meet at 6:30 p.m. on Friday.

“It’s our conference versus their conference so this region match is important for region rankings,” said Herron.

Other competition for Washburn this weekend includes Southeastern Oklahoma State at 2 p.m. Friday, as well as matches versus Tarleton State and Angelo State at 1 and 5 p.m. on Saturday.

While the Lady Blues are prepping for all the teams this weekend, Herron said the Lady Buffs are going to be a handful.

“They’re going to be here and it’s going to be a tough task ahead of us,” he said. “They return three All-Americans. So that match alone will prepare us for what’s ahead in conference. It’ll be a challenge.”