All that jazz, pizzazz and razzmatazz 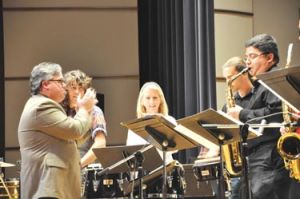 There was no elevator music to be found in the concert hall as the Washburn University Music Department took the stage to show off its jazz prowess.

With the help of Martin Saunders, a highly revered trumpet player and friend of Director Craig Treinen, the groups did their best to break any jazz stereotypes the small crowd may have held.

Saunders is a professor at Marshall University in Huntington, W.Va. He brought with him the expertise of three degrees in music, work with the United States Air Force Band and a reputation complete with many awards. The bottom line is that this guy can rock the trumpet.

Even if jazz has never come anywhere close to your iPod, there was much to appreciate Wednesday night with the talent and effort that the music students, Treinen, and Saunders put into their auditory art. The ensembles and combos captured the attention of the audience with a sexy and spicy Latin Jazz combo that followed the Washburn Jazz Ensemble II.

“The short guy in the middle is the new one – that’s Dr. Saunders,” said Treinen when introducing his friend to join the Latin Jazz group.

Saunders turned out to be a crowd favorite, earning whistles and cheers after face-reddening solos full of the high notes of Latin music.

“I wanted to get up and dance,” said Arceli Gomez, part of a group of college-aged visitors from Manhattan.

The group made the one-hour trip to watch Josh Heaslet play trumpet in the Payless Jazz Combo and larger ensemble. The dedication and support they showed was admirable.

Unfortunately, the same couldn’t be said of Washburn University students. With only a handful, Heaslet’s friends were still the largest group of college students in the audiene. Overall, the audience was sparse, with the Topeka community for the greater part missing.

The Washburn Payless Jazz Combo slowed things down and cooled the audience off after the Latin heat that preceded them. This jazz combo is an honors group of sorts, supported by Payless Shoe Source. It explores the combo style, such as Miles Davis, as opposed to big band that the larger ensembles play.

The group only consists of five members, which makes it easy for traveling. The group is planning jam sessions at the Blue Room in Kansas City in the near future.

“It’s a blast doing this,” said Lucas Whippo, a percussionist in the group.

The Washburn Concert Jazz Ensemble continued the excellence with its big size and sound. The ensemble played “Georgia” by Tommy Newsom, and it was as hot as the state in August. Saunders was front and center, playing more crowd-pleasing solos. This was not music that would help with insomnia, but quite possibly other bed-oriented activities. The sexy, fun jazz was enjoyed by all.

Old roommates Treinen and Saunders, on saxophone and trumpet respectively, began “Beyond the Sea” by Frank Mantooth with a duet. There was no doubt that both men deserve their various awards by the sound of their solos.

The Ensemble ended the night with a New Orleans piece called “Crescent City Stomp.” The musical flavor and pizzazz of Bourbon Street was definitely brought to Topeka Wednesday night.

“Craig is a rare talent and absolutely a gem for the community,” said Saunders. “A lot of people need to realize his rare expertise, one of the best in the country.”.

Athletes are not the only Washburn groups that deserve support for their talent and dedication. Washburn music department groups, such as the Jazz Ensembles and Combos, deserve just as much attention. The Combos and Ensembles provide free entertainment, culture and date ideas to our campus.