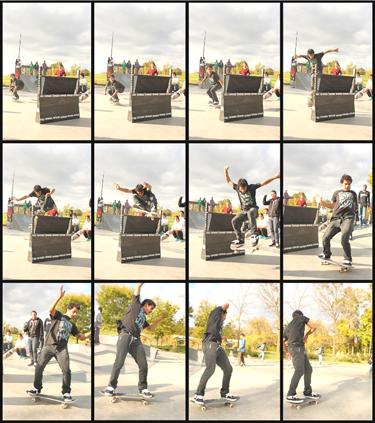 Sk8er bois Dillon Aguilar, above, ollies 40 inches to set a new Kansas City record. The previous record was 38 inches, set by Bryson Pham. Weston Sparks, below, won a year's supply of Gatorade and the $200 prize after he defeated Ryan Pierce in Skate.

Escapist Skateboarding hosted a game of Skate and high ollie contest this past weekend, and skateboarders competed for a $200 cash prize and a year supply of Gatorade.

The game of Skate is similar to the game of Horse in basketball.

One skateboarder does a trick and the other person has to imitate it or they get a letter. The rounds started around noon and went on to the final round, which was between Ryan Pierce and Weston Sparks. The match went on for a long time, trick after trick, regular and switch, until there were almost no tricks left. After a long, rigorous battle, Sparks finally defeated Pierce and walked away with the cash.

Quickly following Skate was the high ollie contest, which was open to anyone who wanted to give it a shot. Many skateboarders participated, including Sean Malto, Tyson Johnson and Addie Tolkes. The height started out at 26 inches and went all the way to 40 inches. Dillon Aguilar was the only one to make it over the 40-inch bar, which won him some cash. Aguilar also set a new Kansas City record, breaking the previous 38-inch record set by Bryson Pham.

Gatorade sponsored the event, supplying free Gatorade for everyone who showed up. The company also supplied cash prizes and a year’s supply of Gatorade for the winners. Overall, the event went really well and it was a great way to spend a fall Saturday, just skateboarding with some awesome people.Escapist Skateboarding is owned by Dan Askew, and his company has been in business for more than nine years. You can find Escapist Skateboarding in two locations in Kansas City.

It frequently hosts events around the area and it has produced two pros – Sean Malto and Ernie Torres, not to mention the other members of the teams, who are all spectacular skateboarders.

You can also find Escapist on Facebook and MySpace, or got to its Web site at www.escapistskateboarding.com.