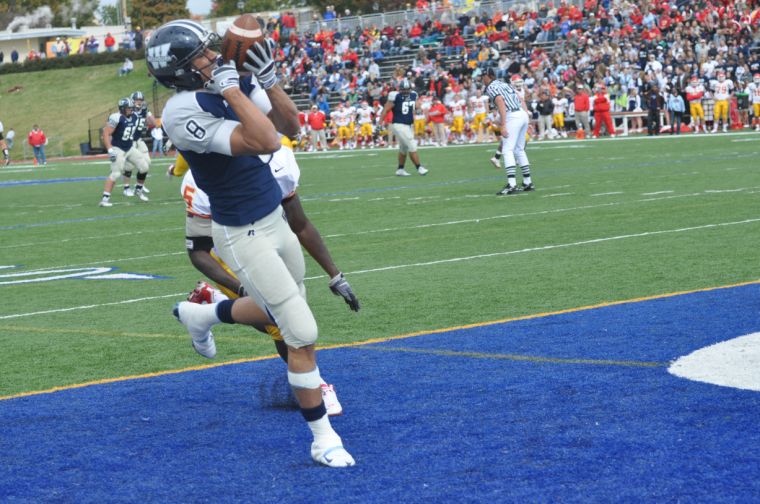 Cole train Senior wide receiver Brad Cole had a monster game Saturday against Pittsburg State, hauling in touchdown receptions of 22 yards (pictured above) and 77 yards. Cole finished the game with six receptions for 149 yards in addition to his two touchdowns, and has seven touchdowns on the year.

Beginning the season with a 5-2 record, the Washburn football team had played some good games. However, Saturday afternoon at home in Yager Stadium the No. 20 Ichabods crushed the Pittsburg State Gorillas 55-3 and coach Craig Schurig said the team finally put it all together.

“We’ve seen [good play] from our team during the course of the year. We’ve had times where we have been really dominant in different phases and today we just put it all together,” said Schurig. “In the first half, everything just fell into place for us. We got field position, our defense stepped up and played great and then offensively we just kept on rolling. …”

“I’m just proud of the way we played. That’s the best we’ve played in quite a while and as a coaching staff, we kind of knew we had this, we just wondered when it was going to happen. And it felt good to have it today on homecoming in front of our home crowd.”

The Ichabods (6-2, 4-2) put up 38 points on the Gorillas in the first half and Schurig said it all began with the start the team had opening the game with a 73-yard kickoff return by Pierre Desir that led to a 3-0 Washburn lead.

“We got a great kickoff return, got points right away,” said Schurig. “Came back and went up 10-0. And then we got a lot of confidence and our team really played with a lot of confidence. Defensively we needed a little confidence boost and our kids came out and played very hard and it just started to roll for us.”

The defense held Pitt to only three points, and according to Washburn Sports Information it was the lowest total for the Gorillas in their MIAA history, dating back to 1988 when they joined the conference. Also with the win, the third-straight over PSU at Yager Stadium, onlookers saw the most points scored by the Ichabods in the 82-game history of the series as well as the largest margin of victory by a WU team against a PSU team, breaking the old margin of 23 in 1953.

Sophomore quarterback Dane Simoneau, tied the school and MIAA record for touchdown passes in a single game with six after throwing four touchdowns in the first half. Ichabod Barry Griffiths threw six touchdowns against Emporia State in 1988.

“It was outstanding,” said Schurig. “Our line did a great job, different receivers caught the ball well, and he’s just so poised. And I know early in the game, he might’ve felt like he missed a few opportunities, but he just hangs in there and usually makes the right decision.”

Simoneau said it was the greatest game of his college career but was very modest about the honor.

“I can’t say enough about my offensive line,” he said. “They gave me time back there. Our receivers are big and strong and fast and they came up with some big catches.”

Schurig said the win against the Gorillas was a good one to erase the memories of last week’s loss to Nebraska-Omaha, and that hopefully the Ichabods could carry their momentum into next week’s game at conference-leading No. 5 Northwest Missouri State.

“We were stilled burned by last week and not getting it done up there,” he said, “but we’ll take this performance and hopefully that gets us on a roll as obviously we have a very tough game next week.”