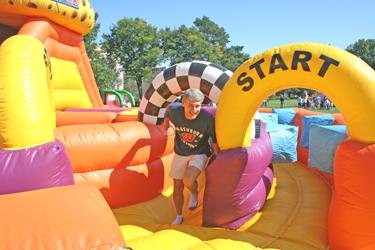 Washburn University had a busy campus of pre-game fun and activities on Saturday’s Family Day before the football game against the University of Central Missouri.

Throughout campus, families of all shapes and sizes enjoyed an array of activity tents and tailgating opportunities. The event was created with all ages in mind, especially the younger crowd.

“When I walked up here, I thought it was so sweet to see all these children having fun,” said freshman BodSquad member Rachael Johnson on the young children enjoying the free activities.

There was definitely fun to be had with the inflated Rat Race Obstacle Course, Washburn tattoo and coloring contest tent and carnival like games.(story continued below)

Many Washburn clubs and interest groups participated with the free Family Day games. A large Operation board game was used by the American Medical Student Association and the musical fraternity Sigma Phi Iota sang during games of musical chairs. The Leadership Institute’s Pit Stop Challenge and Modern Languages Department’s bucket toss game were also part of the fun on Memorial Lawn.

For the less competitive crowd Alan Dietrich’s fossil display of Mosasaur and Xiphactinus skeletons allowed the campus to view creatures more ancient than the stereotypical professor.

The School of Nursing and St. Francis Health Center reminded families of health issues amidst a sea of hot dogs and hamburgers at their free blood pressure screening tent. Level One nursing students were able to practice taking blood pressure readings in a non-traditional environment full of distractions like the chiming bell tower and crowds. This allowed the students to get clinical experience and gave the family members of the Washburn University community valuable insight on their health.

Traffic at the tent kept the volunteers busy. One family stopped by together to settle the score in their competition for best blood pressure. Informative pamphlets were offered on the H1N1 virus, pre-diabetes, health tips on food and wallet-sized walking log cards.

Other activities on campus spread the fun beyond Yager Stadium and Memorial lawn. The Mabee Library hosted Caddy Stacks which allowed families to play mini golf throughout the maze of books. A new art exhibit by Ken Butler called Hybrid Visions debuted in the Mulvane Art Museum. The Washburn Bookstore was bustling with business because of its biggest sale of the year. Shoppers who bought one Washburn-imprinted item got a second one half off. Such a great deal had many people walking out of the bookstore with some new Ichabod paraphernalia to wear with pride.

Outside, grills fired up and delicious-smelling smoke wafted all over campus thanks to tailgaters getting ready for the Ichabods game against the University of Central Missouri. The Alumni Association, BodSquad and Greek houses such as Delta Chi and Sigma Phi Epsilon had food tents for their members and guests. Chartwells also offered culinary treats indoors with its Family Day picnic in the Washburn room.

Food and sales aside, it was the people that made Family Day successful. Families from all across the region came to participate in the gathering.

Sheila Karlin and her family from Garden City, Kan. had to wake up at 4 a.m. for an almost six-hour trip to see freshman daughter Kelli Jo on Saturday. Even after the long journey and lack of sleep, Karlin was still excited for the game, “Go Bods,” she said.

Karlin’s 7-month old granddaughter Hayden Schaffer was also in attendance and cheered on the Ichabods with a blue and white pom-pom, making the Karlin family a perfect example of a dedicated family. Not only were they there supporting their current Ichabod, but introducing Wasbhurn to a possible future one.