RoadRunners: Running down a dream 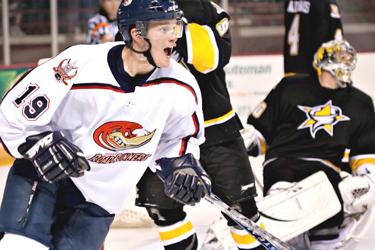 You know you make me want to ... Shout! Topeka RoadRunners' forward Alec Hagaman celebrates during a game earlier this season versus the Texas Tornado. Hagaman is second on the team in points with eight in 2009 while the RoadRunners are currently in first in the NAHL South Division with a record of 7-2-1.

It may only be 10 games into the season for the Topeka RoadRunners, but being in first place in the North American Hockey League’s South Division still has to feel good.

Coming off a strong weekend in which the RoadRunners received good offensive effort from a variety of players, scoring 10 goals in two games against the Wichita Falls Wildcats, Topeka has improved its record to 7-2-1. The team currently sits in first place, ahead of the St. Louis Bandits in the South Division, although the Bandits are right behind with a 7-1-0 record and two games in hand. The two teams have yet to play each other this season. And while it’s early in the season, R.J. Enga, assistant coach for the RoadRunners, sees substantial value in the fast start the team has had.

“If you can get those points in the standings now, they’re real tough to come by later in the year. So you want to get as many now as you can,” said Enga. “They’re (St. Louis) a good team obviously so it’s definitely a benchmark for what we want to continue to do,”

But it wasn’t easy sailing through the weekend. The RoadRunners began Friday night’s match in Wichita Falls, Texas, down 1-0 early on an early goal by the Wildcats’ Brian Sheehan. But later in the first period the ‘Runners tied it on a goal by Nate Milam, who also had a goal later on the game and who has had five goals in the last three games, as they went in to win 5-2. Cole Schneider also had a goal and an assist Friday night. Evan Karembelas, who has started of late in replacement of injured goalie Cooper Frederick, got the victory.

Frederick according to Enga is close to making his way back into the lineup after being out the past four weeks with an injury.

On Saturday, the game looked to be a shootout with the two teams combining to score five goals in the first period, as the Runners lead 3-2. But the second and third periods were tamer, with the RoadRunners outscoring the Wildcats 2-1 during the final two periods to win Saturday 5-3. Alec Hagaman had two goals to pace the ‘Runners, but Edgars Lipsberg, Erik Higby and Bryce Johnson also had two points in the victory. Eric Rohrkemper stopped 26 of 29 shots to get a victory in his first start with the Runners.

And while the Roadrunners don’t have any players absolutely dominating in goals or assists for the team, many players on the roster have provided a spark for team through the first 10 games.

“It is spread out a little bit; it’s not just one guy (scoring). When you’re one dimensional, it’s an easier time for your opponents to negate opportunities,” said Enga. “But when you have scoring through four lines, or at least opportunities, you’re a tough team to play against.”

The RoadRunners travel this weekend to Springfield, Ill. to face the 5-4-2 Springfield Jr. Blues, who were 1-1 over the weekend against the Janesville Jets. The Runners will then return home to the Kansas Expocentre’s Landon Arena on Oct. 22-24 when they face the Albert Lea Thunder, who will be making their first ever trip to Topeka.