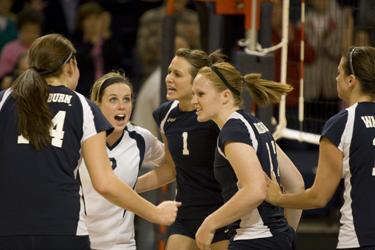 In most sports, there is no limit on the number of substitutions a team can make. However, in volleyball, that number, many onlookers found out in the Washburn-Pittsburg State match Saturday afternoon, is 12.

In the third game of the match that the Lady Blues would win 3-1, leading at the 30-29 mark, Washburn made its final sub, not knowing how long the game would go. That put the team in a predicament of not having enough hitters, so Jennifer Kolarik and Tessa Brophy, both had to play those positions on the front row.

“The situation we were in game three where we had two [defensive specialists] in the front row because we ran out of subs, I was really, really proud of our team for the fact that we were able to overcome that,” said coach Chris Herron. “We had two kids that never swing at all and they’re playing the front row. One of them could barely get it over the net. So it’s one of those types of things where since we overcame that, I was really proud of our kids, regardless of how the match turned out.”

The Lady Blues ended up winning the game 35-33, in one of the longest games in Washburn volleyball history.

Herron said just to play a game that long with the situation the team was in was very nerve-wracking.

“Your stomach starts getting tied up in knots I can tell you that,” he said.

Senior setter Kate Hampson had the winning kill and said it was the longest game she’d ever been part of.

“I thought we were going to play to like 45. It was just that back and forth. It just seemed like we would get a kill and they would get a kill. We never really rallied until that last point, and then it was a really long rally.”

Hampson’s dump to win the game came after several volleys back and forth by both teams. Hampson, not usually one to get kills, said she noticed they weren’t expecting her to go for one, so she kind of surprised them.

“I hadn’t really attacked at all so they weren’t jumping with me anymore,” she said. “So I just knew that they had all been on the court to get the last ball over and they were still running back to their positions. So I knew that if I just hit the ball over quick, it would probably land. Thank God it was in.

“I think we just all dropped to our knees in disbelief because we just won after so many points. It was unbelievable.”

The eighth-ranked Lady Blues lost the first game to the No. 22 Gorillas 25-19 before winning the next three.

“I thought we played hard. I thought they played hard,” said Herron. “The emotions of the match are always so you get high, you get low. As the coach, you try to sit over there and not get so high and so low. And for me that’s come with age. Again I’m up and I’m down. But I’m a whole lot more calm than I used to be.”