For whom the harp tolls 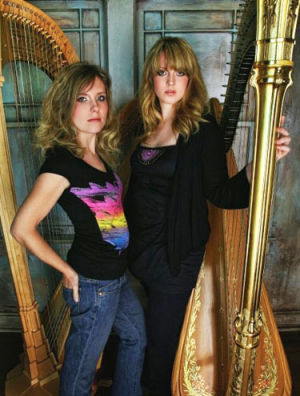 A great many people cringe at the very mention of a tribute band. Granted, there are a few that do justice to the original songs they cover in a set, but let’s be honest, most of them are locals without much experience banking on gaining exposure from someone else’s chart-topping hits. Nothing wrong with that.

But out there in the tribute band world of something old, nothing new there is a glimmer of intrigue and surprise in the harp duo Harptallica. You read that correctly, Harptallica: the all harp tribute to thrash band Metallica.  Both bombshell members of the duo are classically trained musicians in harp performance, but know how to rock out to the most famous hits of the band that ruled the airwaves in the ‘90s. Metallica debuted at No. 1 on the charts with its self-titled album in 1991, catapulting them from the underground music scene to international acclaim and adoration.

Flash forward to 2006 when Ashley Toman, a then graduate student at the Eastman School of Music, decided to arrange Metallica’s “Fade to Black” for two harps. That first venture developed into a full CD compilation of songs played by Toman and former Harptallica member Patricia Kline.

This year, when Kline left the duo to pursue a doctorate in harp performance, Mollie Marcuson of Kansas City stepped in to fill the void. Since then, the group has completed its third U.S. tour and first European tour last September.

These harpists transform the typically hardcore thrash metal madness into something altogether mesmerizing, giving off an entirely different impression on the ears. It is this kind of redefinition that classical music has needed to gain exposure for a genre that is all but forgotten in a music age long-dominated by simple hip-hop and pop regurgitations. In recent events, Harptallica has branched out and is also incorporating music from Megadeth and Black Sabbath into performances.

Toman began playing harp and studying music at 15 in Traverse City, Mich. Three years later she was accepted to the prestigious Eastman School of Music where she earned both bachelor’s and master’s degrees in harp performance and served as a harp teaching assistant. Since moving to Louisiana, Ashley has appeared with the Baton Rouge Symphony, the Acadiana Symphony Orchestra and the Louisiana Philharmonic. She now resides in Baton Rouge, La., where she maintains a busy freelance schedule and teaches privately.

Marcuson began playing the harp at age 7 in her home town of Kansas City. She received her bachelor’s degree in harp performance from the University of Minnesota in the spring of 2003, and her master’s degree in harp performance in 2006 from the Shepherd School of Music at Rice University. Marcuson is in her second season as principal harpist of the River Oaks Chamber Orchestra, and fourth season as harpist for the St. Paul Chamber Orchestra.

Harptallica offers a copy of its first CD and other merchandise for purchase on its Web site. For a preview of the music or to watch videos from previous performances, visit www.harptallica.com. To become a fan and receive regular updates on future performances and music releases, look for Harptallica on Facebook.