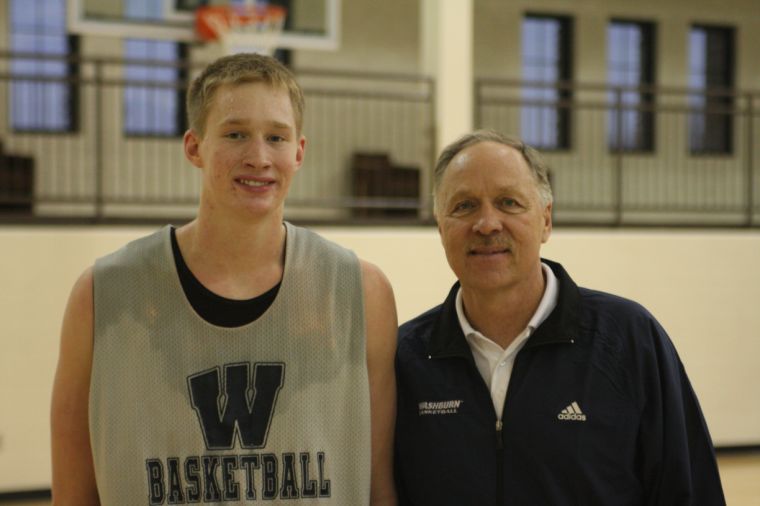 Carry On My Wayward Son Bobby Chipman is trying to follow in his father’s footsteps as a college athlete, beginning his freshman season at Washburn as a guard on his father’s team. Bob Chipman is in his 31st season as head coach at WU.

During childhood, kids often idolize their parents, watching their every move and hoping that one day they’d grow up to be just like mom or dad.

But as time goes on, interests change, and for many, that dream fades into the past, becoming a memory of what used to be. However, for Bobby Chipman, the dream of being “just like dad” never faltered.

The Chipmans’ passion for the game of basketball began when father Bob Chipman started playing on sports teams in school. After trying his hand at several sports, Bob narrowed his focus to basketball early in his high school career.

“Basketball seemed to fit my athletic abilities, and I had some success with it,” said Bob. “Once you have a little success, you just kind of go with it.”

Bob took that success to the college level, and after an exceptional career at Kansas State University, he switched his focus to coaching, developing an impressive resume in his time at Washburn. What is perhaps even more impressive, though, is the son he developed along the way.

Bobby’s path to basketball success hasn’t looked much different from his dad’s thus far, as he too determined early on what his future would hold.

“Ever since I can remember, basketball has always been my favorite sport to play,” Bobby said. “I played football and baseball, but I dropped those off pretty early and focused on basketball.”

Although Bobby ultimately decided to pursue basketball, Bob chose to put his role as dad first by encouraging his son to get involved in other sports and activities.

“I wanted to give him the opportunity to do a lot of things, but down deep, I think I wanted Bobby to play because I realized how much fun it is,” Bob said. “It’s a great experience, and it teaches you so many great things, which you need later in life.”

Around this time last year, Bobby began receiving letters from other schools about playing basketball. Although he looked at a few colleges and took a couple of visits, Bobby knew his heart was set on Washburn.

“Ever since I was little, I always kind of dreamed about playing for my dad. I almost knew that if I had the chance, I was going to do that,” he said.

Bob has shared in his son’s excitement, and he admits that getting to watch Bobby play basketball every day has been a lot of fun.

Although the player/coach roles have been added to the picture, the situation hasn’t changed the dynamic of the relationship between Bob and Bobby.

“I thought it was going to be really difficult to coach my son, but because of the way Bobby is and the way he gets along with the group and tries to do everything for the team, it’s just been ultimate fun,” Bob said. “I can’t wait for the next practice, the next game and the next four years of his career.”