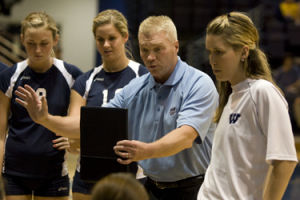 With the Turnpike Tussle against Emporia State looming at 7 p.m. Friday for the Washburn volleyball team, many are already anticipating the final home match of the season for the Lady Blues as it will be Senior Night and a top 10 matchup between rival schools.

Being called a “Blue Out Game,” the Washburn Student Government Association will be handing out Blue Out T-shirts in Lee Arena to the first 350 students and free pizza after the second game for Washburn students.

However, before all the hoopla of Friday is a match versus Fort Hays State at 7 p.m. tonight at Gross Coliseum in Hays, and Washburn coach Chris Herron is making sure his team is prepared for the Tigers.

“One of the things I told my kids is this: We’re not going to talk about Emporia State until we play to Fort Hays State,” said Herron. “If we start looking past matches, we’ll be getting caught from behind. We’re just going to focus on Fort Hays State and we’re going to go from there.”

Fort Hays State is tied for last in the MIAA with Missouri Western at 3-15 and the Tigers have an overall record of 7-25. They have lost seven straight matches and 10 of 11 with their last victory coming Oct. 21 at home against Western. While Hays leads the all-time series versus the Lady Blues 44 to 29, Washburn has won seven straight and eight of nine including its 3-0 sweep of the Hays in Lee Arena on Oct. 14.

The match versus Hays is still important, but eighth-ranked Washburn’s match against ninth-ranked Emporia has bigger implications for the playoffs and NCAA regional rankings. If the Lady Blues (30-4, 14-4) win, they’ll most likely finish tied for second in the MIAA with the Hornets (27-4, 14-3). The Lady Blues lost their first 2009 match to the Hornets, 3-2, on Oct. 16 in White Auditorium and Emporia has dominated the overall series 76 to 25.

However the season series has been a bit closer as the two teams have split in each of the last three seasons, with each team winning on its home floor the past two years.

The Lady Blues’ only senior Kate Hampson, who was honored with two awards in the last week including being named the MIAA Specialist of the Week and being named to the 2009 CoSIDA/ESPN The Magazine Academic All-District Third Team along with teammate Mollie Lacy, has just two regular season games left with the Lady Blues and said she wants to make sure that it ends well.

“At Fort Hays we just need to not let up and not play down because they’re in the conference and they’re playing better,” Hampson said. “We just need to come out strong and try not to think about Emporia State and Friday.”