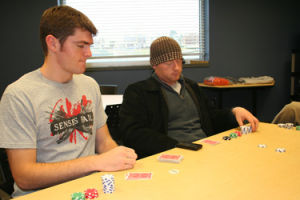 The celebration was kicked off with an array of events, including group exercise classes, a fun run/walk in the morning and a Texas Hold ‘em poker tournament at noon. All Washburn faculty and staff were admitted to the SRWC free of charge, and current SRWC members were allowed to bring one guest over the age of 18 for free.

Joel Bluml, director, has been at Washburn all five years of the SRWC’s existence and has seen a great deal of changes to campus. However, after seeing more than 450,000 people walk through the doors since 2004, he said the SRWC has a special place in students’ hearts.

“I think, just in general, the addition of the SRWC to Washburn’s campus has been a huge change in and of itself,” said Bluml. “It’s added another social hub to the university and dynamically changed campus life after 5 p.m. I can’t speak for the students, but I think students would not picture Washburn the same if the rec center wasn’t here.”

The 37,000 square foot SRWC features a three-court gymnasium that can accommodate basketball, volleyball, badminton and the myriad of intramural sports that the SRWC offers. A fitness loft occupies the second floor and includes a track, as well as an array of cardiovascular and resistance training equipment. A rock  wall dominates the main entrance and a wellness suite, multi-purpose room and locker rooms round out the SRWC amenities. Reservations can also be made by groups affiliated with Washburn.

“We’ve continued to strive to give students the opportunities that they want,” said Bluml.

“That’s kind of the driving force. To make sure we’re giving students the opportunities they want to participate in and aid in their college success.”

During his five years as director of the SRWC, Bluml has learned the tricks of the trade, building a successful program up from the ground by incorporating new techniques while dropping ineffective ones. Bluml said it’s important to pick and chose the more effective trends.

“Every year there’s something new and dynamic that comes out,” said Bluml. “The trick is, you can’t jump on every bandwagon or every trend that comes out, but identifying the ones you think are going to stick and putting time and resources into those.”

While Bluml has been a key ingredient to the success of the SRWC, he stressed that none of that success would have happened without the foresight of Washburn president Jerry Farley and the board of regents at the time.

“Without those people that do that planning and have that vision, we could have ended up in a very different place, not only from an SRWC standpoint but for many of the buildings and services that we offer here,” said Bluml.

In the end, Bluml had one hope for the anniversary.

“We just hope people come and join us to celebrate the success of the SRWC,” said Bluml. “We’re very glad we’re here on campus.”

For more information on Washburn’s Student Recreation and Wellness Center, go to its Web site at www.washburn.edu/getfit.