The Review goes to Austin 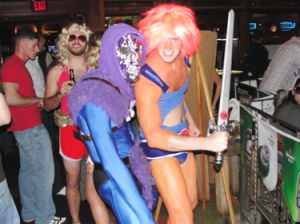 Recently, a group of road-trip-ready students left Topeka for the self proclaimed “music capital of the world” in Austin, Texas.

At first glance, Austin doesn’t seem very different from any other city in the southern U.S. The weather is gorgeous and the atmosphere is one of a town that is in a near constant state of party-time expectations.

The first night in Austin for the group of students featured a dinner in one of the more popular restaurants on the Sixth street drag named the Iron Cactus. Centrally located in downtown Austin, the locals flock from all over to enjoy the food that the Iron Cactus has to offer. In addition, while dining on some superb local food, one can sit and listen for hours as the sound of local jam bands in the nearby clubs wail off into the Texas evening.

For those who aren’t familiar with Austin and its layout, Sixth Street would be equivalent to Wanamaker Road in Topeka — except with a lot more character and panache. Much of Sixth Street is an oasis of culture from places as far away as Ireland, India and Vietnam, yet, it somehow meshes with the local watering holes that host a rotating group of local bands that play a wide assortment of music but still stick to what makes Austin an iconic city, Texas blues.

On every night, including Halloween, there were at least three clubs that saw live music going on within a block or two of the hotel, where the contingent of Washburn students were staying. In particular, the Copa Bar and Grill and a club called Momo’s featured a steady stream of local bands, including the Blue Ruin Trio which played at the Copa over the holiday weekend and kept the place packed with their brand of Texas blues and rock.

Beyond the music scene, there is a vibrant culture scene as well. Austin, having been at one time the capital of a nation of its own, seems to embrace the big city attitude with a more welcoming feel of a middle-sized town. This openness was on display the entire trip, with people willing to give directions and advice on local food and entertainment almost at will, and with no resentment for the tourists lost in a sea of other tourists.

The presence of the University of Texas at Austin, is a huge contributor to the feeling of youthful exuberance that pervades the city in the almost 22,000 students that attend the school and help to keep the average age of the local population closer to 20 than 40.

The only thing that might detract from the tourist experience might be the random events that always seem to be happening in the downtown area and thus taking up space and making traffic a bit of a headache with blocked-off streets. This was especially highlighted by the use of blockades on Halloween to make Sixth Street into the closest thing to Mardi Gras this side of New Orleans as people dressed up to get down all night long.

For those contemplating a trip south to escape the cold weather that winter will surely bring to Topeka, take a look at what Austin has to offer and start making your travel plans.

As Stevie Ray Vaughn, one of Austin’s greatest sons, once said, “Austin, Texas: She’s my pride and joy.”