‘Love and Theft’ takes country music in an alternate direction 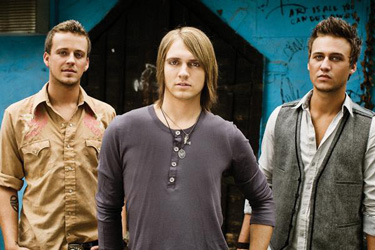 Love and Theft, a country trio out of Nashville, is an up and coming band that my friend and I have been following for a couple years now.

It recently released its debut CD, “World Wide Open,” and the group has already heard a modest amount of airtime on the radio.

The band toured for a bit with Taylor Swift and is currently on tour with Jason Aldean. This band definitely falls in the “tweener” category of country music, as it can easily fit into both country and pop formats. While the term “country music” has a tendency to scare off many listeners, this band isn’t your ordinary “God and Beer” type of country band. It’s songs feature deep lyrics, amazing vocals that blend together perfectly and a completely unique sound.

To get a better idea of how Love and Theft’s music sounds, imagine a combination of the Eagles, Rascal Flatts and the Goo Goo Dolls. In fact, those are three of the many differing influences listed on the band’s MySpace account (www.myspace.com/loveandtheftmusic), where you can actually listen to the music and hear for yourself.

Perhaps the trio’s biggest hit so far has been “Runaway,” an upbeat song about hopping in a car and escaping the troubles of the world. This is probably the perfect road trip/vacation/just driving around song, and it is incredibly catchy. After hearing this song through the first time, don’t be surprised if you’re still humming or singing it.

Another catchy hit is “It’s Up to You,” where they once again show off their great vocal blend and guitar abilities. This is one of the songs that falls under a more ‘alternative’ group of music, sounding much less like country than alternative acoustic music.

For those who find the music catchy and would like to see a live show, there is good news. Love and Theft will be playing at the Sprint Center in Kansas City, Mo., this June.