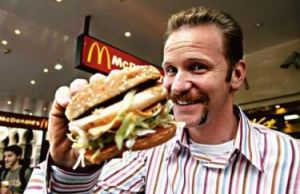 TOPEKA –  Filmmaker Morgan Spurlock, writer, producer and director of the 2004 feature film “Super Size Me,” will speak at 7 p.m. Thursday, Dec. 3, in the Washburn Room, Memorial Union, at Washburn University.  No admission is charged and the public is invited.

Since earning an Academy Award nomination for “Super Size Me,” in which he documented his health as he spent 30 days eating only food from McDonald’s, Spurlock co-starred and produced the 2008 film, “What Would Jesus Buy?” based on the evangelism of Reverend Billy and the Church of Stop Shopping Gospel Choir during a cross-country mission to save Christmas from the Shopocalypse (the end of humankind from consumerism, over-consumption and the fires of eternal debt).  In 2008, he produced and appeared in “Where in the World is Osama bin Laden?” which follows his global search for the al Qaeda leader.

The event is sponsored by the Washburn Student Government Association.  For information, call 670-2320