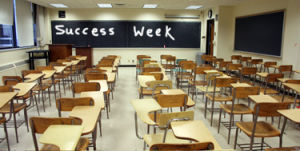 Washburn University is one step closer to having a Success Week.

Amidst heavy debate Monday afternoon, the proposal to make Success Week a university policy passed under secret vote by the faculty senate by a vote of 17-5, with one vote abstained. The proposal must be presented before general faculty early next semester, however, before it can be passed as policy.

The proposal was met with some trepidation by faculty from the fine arts areas of study, and concerns about the Success Week affecting end of year concerts, exhibits and performances were addressed. At one point, music department chair Ann Marie Snook said the new policy would be “crippling” to the music department. Section C of the proposal, however, states that such fears are unsubstantiated.

Section C. If major course assignments must be given during Success Week, they should be due no later than the Wednesday of Success Week. Exceptions include class presentations by students and semester-long projects such as a project assignment in lieu of a final. Participation and attendance grades are acceptable.

As part of the policy, which WSGA president Garrett Love said was inspired by the University of South Florida’s dead week policy, professors may also petition to the department chair if they feel the policy infringes on their ability to effectively teach.

There were also some amendments made to the proposal during the meeting. The first was a proposed removal of two paragraphs from the policy, which Love accepted as a friendly amendment, meaning it did not have to go before a vote. The following is the removed excerpt.

Instructors are to be reminded that the majority of students are enrolled in multiple courses in the semester, and widespread violation of this faculty handbook policy can cause the workload of students to be excessive as the students begin preparing for their finals examinations.

Students should be reminded that their primary reason for attending college should be their curriculum and students have the responsibility of studying throughout the entire semester.